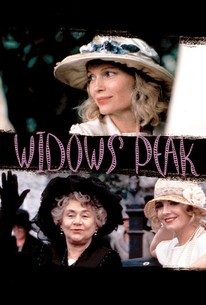 In the Irish town of Kilshannon in the 1920s, a matriarchal clique of widows tightly sets the rules for behavior. Heading the town's ruling circle is the doughty Mrs. Counihan (Joan Plowright). The only non-widow in town is a reclusive middle-aged spinster, Miss O'Hare (Mia Farrow), who seems to be guarding some kind of secret. Crashing into this provincial coterie is dashing, urbane Edwina Broome (Natasha Richardson), who immediately starts feuding with O'Hare, for no apparent good reason. Broome mangles O'Hare's prize roses and bumps her skiff in a boat race. Counihan's dimwitted son, Godfrey (Adrian Dunbar), proposes marriage to Edwina. Eventually, the true motives of all involved are revealed.

Michael Casey
as Pianist
View All

Widows' Peak is chiefly a comedy, and the main weakness is the choice of director -- John Irvin -- who is best known for action movies and, on this evidence, should stick with them.

Widow's Peak is another of those sly, witty, quietly ribald comedies that have been coming out of Ireland in the last few years.

Fun for the whole family. Add a star if you're both Irish and widowed.

a low-key character comedy that's worth a look

A diverting and well-acted English film with just the right mix of comedy and mystery.

There are no featured audience reviews yet. Click the link below to see what others say about Widows' Peak!