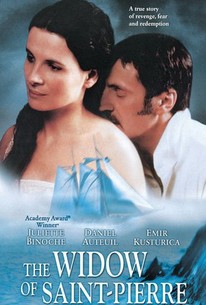 Critics Consensus: Critics are impressed with The Widow of St. Pierre's intriguing story and beautiful cinematography.

Critics Consensus: Critics are impressed with The Widow of St. Pierre's intriguing story and beautiful cinematography.

Critic Consensus: Critics are impressed with The Widow of St. Pierre's intriguing story and beautiful cinematography.

Long-established director Emir Kusturica makes his acting debut in Patrice Leconte's 19th century tale of a loyal, strong-willed woman who follows her soldier husband to a desolate French territory off the coast of Newfoundland. Madame La (Juliette Binoche) lives in marital bliss on the island of Saint-Pierre with her loving, oddball husband (Daniel Auteuil), simply called "the Captain" by his charges. Their world is upset one night, however, when two visiting sailors on a bender murder a local citizen. Neel (Kusturica) is sentenced to death, but the other one dies in a carriage accident before reaching prison. As the island waits for a guillotine (or "widow") to be shipped from the French government, Madame La does her best to convince the townspeople that Neel is genuinely good of heart and doesn't deserve a bloody fate. La Veuve de Saint-Pierre marks the second time that Auteuil has worked with director Leconte: their first effort, La Fille Sur la Pont, earned him a Best Actor award at the Cesars, France's equivalent to the Academy Awards. La Veuve screened at the 2000 Cannes and Toronto film festivals.

Michel Duchaussoy
as The Governor

Dominique Quesnel
as The Proprietor

Anne-Marie Philipe
as The Governor's Wife

Jean-Paul Rouvray
as The Priest

Niel Kroetsch
as Captain of the Marie Galante

Patrick Steltzer
as The Brigadier

Bernard Tanquay
as The Orderly

Kendall Negro
as The Child

Sarah McKenna
as Emilie
View All

A work of art that immerses you in a time and place so completely that it could be a documentary.

The film seems to be saying, though, that the taking of a life -- whether by murderers or by the state -- is only possible when we refuse to recognize the humanity in others. And this is a message we all need to hear.

Issues of life and death, love and friendship play out delicately and powerfully.

Each of the actors smoulders with quiet strength.

Few films have set up the contrast between the cruel machinery of human justice and the piercing glory of Christian mercy more starkly and profoundly.

When it comes right down to it, Leconte understands that Binoche's face tells all the story we need.

It's a tale about wishy-washy humanitarianism.

An affirmation of the complexity of women. Here, a guard captain's wife campaigns for the life of a condemned man, knowing that her actions threaten her husband's career and possibly endanger his life. Perplexing behavior indeed but director Patrice Leconte uses it to full effect, adding humanistic elements to what otherwise could have been a listless period piece. An intelligent, insightful film.

Neel Auguste ( Kusturica) is condemn to death for a murder on the little island of Saint-Pierre, which was, a territory of France. The guillotine( Veuve) is the instrument of death in France at that time. But the island doesn't have its "Veuve" and one is to be sent from Martinique. In the waiting, the convict is kept in prison at the captain's ( Daniel Auteuil) residence. The captain's wife (Binoche) is convinced that the murderer deserves a second chance and she's working towards that goal. All the performances did a great job, especially Juliette Binoche and Emir Kusturica. Their chemistry is shown so real and keeps the viewer hooked to see what will finally happen.

A dark, passionate tale of a woman who sets out to redeem a convicted murderer. She succeeds, but at what cost to herself, to the convict himself, and to the colony of St. Pierre? Juliette Binoche is, as usual, radiantly beautiful, compassionate, and firey as the Madame La. Daniel Autiuel plays her husband, La Capitain, as a principled man who throws caution to the wind because of his love for her. A bleak, cold landscape, properly pompous civil authorities, and the squalor of life in a far outpost of the French Republic all gave the film an authentic feel. This viewer hoped for goodness to win out, but expected tragedy, and was not disappointed. Always four stars for Ms Binoche!

Such a sad and hopeless movie. People weren't very nice back in 1849! Hopefully the Widow can find a love in her life again. I was dissapointed Louis didn't live very long.