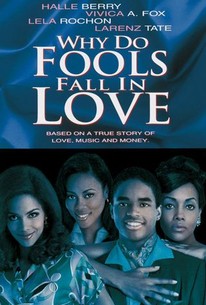 Critics Consensus: This is a fun comedy with delightful musical numbers.

Critics Consensus: This is a fun comedy with delightful musical numbers.

Critic Consensus: This is a fun comedy with delightful musical numbers.

Why Do Fools Fall In Love Photos

Gregory Nava directed this biographical drama on the brief but intense life of singer Frankie Lymon who stayed with the popular Frankie Lymon & the Teenagers group only for a year. Lymon was 13 years old when the group erupted from radios and jukeboxes with their 1956 hit, Why Do Fools Fall in Love? and appeared in the movie Rock, Rock, Rock (1956). After Mr. Rock and Roll (1957), Lymon turned solo, but then it all fell to pieces. Lymon's career was over by the time he was 18, and he died of a heroin overdose eight years later. Jumping from the '50s to the '80s, this film traces the rise and fall of Lymon (Larenz Tate) in a series of flashbacks as courtroom claims on Lymon's royalties are outlined by three women: Zola Taylor (Halle Berry) of the Platters R&B group; Elizabeth Waters (Vivica A. Fox), who turned prostitute to cover costs of Lymon's recovery from addiction; and schoolteacher Emira Eagle (Lela Rochon). Little Richard also makes a courtroom appearance, while Miguel A. Nunez Jr. portrays Little Richard in scenes set in the '50s. Shown at the 1998 Urbanworld Film Festival (NY). ~ Bhob Stewart, Rovi

Vivica A. Fox
as Elizabeth Waters

Little Richard
as Himself

Shirley Caesar
as Herself

John West
as Singer
View All

Critic Reviews for Why Do Fools Fall In Love

Why Do Fools Fall In Love never really conveys the essence of its subject.

"Why Do Fools Fall in Love" is a misfire in several ways, but the key problem is that the writers have a clunky, concrete Christmas tree, not something thematic that can be used to devise scenes of various shades and colors.

Too ill defined to emerge from the pack of box office also-rans.

A celebration of pop fantasies, a boyish rascal with a helium voice, and three pretty fools who fell in love with him.

A fresh, enlightening example of how to take a tragic American show-business story and make it funny, warm and terrifically entertaining.

Why Do Fools Fall in Love, in its own glossy, entertaining way, is a deeper examination of how an individual can use numerous masks to conceal himself, even from the ones he loves.

Worth it for the music -- but only barely.

The biggest problem is the man at the center.

Audience Reviews for Why Do Fools Fall In Love

Based on a true story: Frankie Lyman (Why do fools fall in love).

The first hour or so ranks as favorite movie material. It's enormously entertaining and a fresh spin on standard biopic: Diana Ross's cover of Why Do Fools Fall in Love spawns a court case where three women claim the rights to the song as Frankie Liman's wife. My favorite sequence is an infectious Larenz Tate singing (well, lip synching) to Goodie Goodie! But the movie sort of falls apart at the end. Oh, well. Focus on the positive!

Why Do Fools Fall In Love Quotes