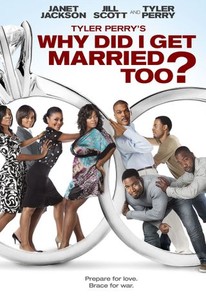 Critics Consensus: It's bolstered by a strong performance from Janet Jackson, but ultimately, Tyler Perry's Why Did I Get Married Too? doesn't add anything new to Perry's melodramatic formula.

Critics Consensus: It's bolstered by a strong performance from Janet Jackson, but ultimately, Tyler Perry's Why Did I Get Married Too? doesn't add anything new to Perry's melodramatic formula.

Critic Consensus: It's bolstered by a strong performance from Janet Jackson, but ultimately, Tyler Perry's Why Did I Get Married Too? doesn't add anything new to Perry's melodramatic formula.

Why Did I Get Married Too Photos

This sequel to Tyler Perry's Why Did I Get Married reunites the cast from that earlier movie, again playing a group of eight friends who take an annual week-long vacation with each other. As they reconnect, Sheila (Jill Scott) discovers that her ex-husband, Mike, is planning to wreck her new marriage. Their troubles lead to the others facing some uncomfortable truths about their own relationships. The film co-stars Janet Jackson, Malik Yoba, Michael Jai White, and Louis Gossett Jr. ~ Perry Seibert, Rovi

News & Interviews for Why Did I Get Married Too

View All Why Did I Get Married Too News

Critic Reviews for Why Did I Get Married Too

Perry has plugged a hole in the market, for sure; it's just all a bit pleased with itself.

Fans of utter predictability will be well satisfied.

Even a scene with Janet Jackson trashing a living room cannot lighten the laboured atmosphere.

It becomes clear why Oprah is such a huge Perry fan.

Burdened with a bevy of unlikely plot twists, this is less a movie sequel than the latest installment in a big-screen soap opera.

[Writer/Director Tyler] Perry can't seem to break from his usual melodramatic, soap opera-esque formula in this movie, but he does manage to tug at our emotions for a funny, heartfelt, relatable look at marriage and love.

There are some decent performances here, particularly from Jill Scott, but they just can't save the clichéd material from weighing down the whole film.

Go to see it and you may ask yourself why did I bother?

Undermined by its inability to stand separately from its predecessor.

Audience Reviews for Why Did I Get Married Too

Never boring, but for all the wrong reasons. (http://bit.ly/dKDJ7E)

I love Angela and Marcus couple. Angela is hilarious and never fails me to laugh. But this wasn't better than the first one. I felt slightly bored. But I gotta admit there were some scenes that will make you laugh out real loud. The story is pretty much the same only with some twists here and there. The ending was unexpected and sad.

Tyler Perry can write his but off, and boy can he direct. Those things along with some good acting made this his best movie yet.

CAST: Tyler Perry, Janet Jackson, Tasha Smith, Jill Scott, Michael Jai White, Sharon Leal, Malik Yoba, Richard T. Jones, Lamman Rucker DIRECTOR: Tyler Perry SUMMRY: Four couples reunite for their annual vacation in order to socialize and to spend time analyzing their marriages. Their intimate week in the Bahamas is disrupted by the arrival of an ex-husband determined to win back his recently remarried wife. MY THOUGHTS: REALLY different from the first. Darker with a lot more going on. Janet Jackson really brought the drama. Her character really goes through a lot. I read she channeled her brother greivence to take her through the emotions of the movie, which is really sad knowing that and seeing her cry and break down. But it's not all sad and gloom. It has comedy, and it's pretty funny. But that's all Tasha Smith. Her character is as crazy as ever and very funny. I was really surprised by the ending. I was also surprised with the actor who does a small cameo in end of the movie with Janet Jackson. I think maybe there will be another movie brought from that small introduction. Good movie. Just as good as the first. Worth seeing if you liked the first film.

Why Did I Get Married Too Quotes