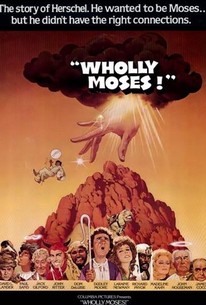 A broadly farcical comedy that attempts to ape the wickedly funny, Bible-spoofing humor of the previous year's Monty Python's Life of Brian (1979), this all-star rib-tickler top-lines Dudley Moore as Herschel, a historical also-ran whose life so closely parallels that of Moses that Herschel begins believing that he, not the other guy, is God's chosen prophet, setting out to free his people from slavery even though his services are not required. Herschel's travels are always a step or two behind Moses and bring him into the company of various period personnel, including Egypt's Pharoah (Richard Pryor), the Devil (John Ritter), an angel (Paul Sand), and the beautiful Zerelda (Laraine Newman). He also discovers that his slave, Hyssop (James Coco), is actually his biological father. Herschel eventually becomes the subject of the lost "Book of Herschel," recounted in a scroll discovered by a modern-day couple (also played by Moore and Newman) vacationing in the Holy Land. Wholly Moses (1980) co-stars several other recognizable actors in supporting roles, including John Houseman, Madeline Kahn, and Jack Gilford.

Paul Sand
as Angel of the Lord

Richard B. Shull
as Jethro

Brion James
as Guard at Banquet

Richard Pryor Passes Away at 65

The movie's not funny on its own, and since movie audiences are scarcely going to be shocked by its mild but relentlessly repetitive irreverence, it all boils down to a very old joke.

There are a couple of droll sight gags, but nothing can redeem Wholly Moses! from its destiny of eternal mirthlessness.

An opportunistic attempt to cash in on the diminutive Moore's post-10 stardom by shamelessly ripping off the premise of The Life of Brian.

Dudley Moore is funny. James Coco, Madeline Kahn and Richard Pryor are funny. Director Gary Weiss showed he was funny with his direction of Saturday Night Live. So, why isn't Wholly Moses funny?

Next to the pointed, funny Life of Brian, this is absolute sacrilege.

Life of Brian was protested by religious groups as heresy. Wholly Moses is silly and lowbrow enough that it never generated equal controversy. It's in every way inferior to that other film, but silly enough to provide a few cheap laughs.

The direction by first-time director Gary Weis is flat, and the script by Guy Thomas is uninspired.

There are no featured audience reviews yet. Click the link below to see what others say about Wholly Moses!!