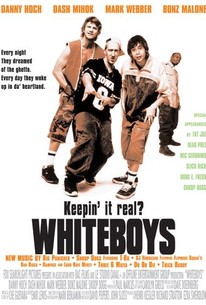 What do you do if you're a white guy in a white town who happens to love black music? Flip (Danny Hoch) is a middle-class kid from the Iowa corn belt, but he doesn't think of himself as just another guy from farm country. Flip loves hip-hop, and he longs to be respected as a hard-core rapper. But a white guy from Iowa who drops mad rhymes looks weird. While Flip and his buddies Trevor (Mark Webber) and James (Dash Mihok) may have the clothes, the style, and the lingo down pat, to most folks they look like three white boys trying to be black. When Khalid (Eugene Byrd), an African-American from Chicago, transfers into Flip's school, Flip comes to his rescue when other kids give him a hard time, and, while Khalid is as baffled by Flip's affectations as most people, a friendship grows between them, and Khalid grudgingly agrees to take Flip and his crew to Chicago, where they get a look at hip-hop culture in a way they haven't seen before. Director Marc Levin previously explored elements of hip-hop culture in his first dramatic film, Slam; he also made a number of acclaimed documentaries, including Gang War: Bangin' in Little Rock, about middle-class kids who have absorbed the gang lifestyle through popular culture. Whiteboys features appearances by a number of noted hip-hop artists, including Snoop Dogg, Slick Rick, Doug E. Fresh, and Fat Joe.

Lyndsey Barnett
as Girl in Bathroom

Snoop Dogg
as Himself

There are no critic reviews yet for Whiteboys. Keep checking Rotten Tomatoes for updates!

There are no featured audience reviews yet. Click the link below to see what others say about Whiteboys!