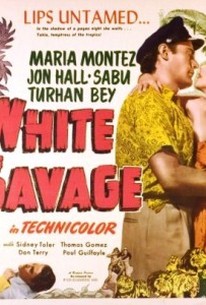 This frothy fantasy adventure centers upon the exotic romance between a shark fisherman (the sharks he captured are used for the manufacture of vitamin A) and the beautiful princess of Temple Island. They meet when the fisherman asks a young boy with royal connections to introduce him to the princess so he can ask for permission to fish the teeming waters near the island. The boy introduces the hunter to the girl and love immediately blossoms until he makes his request. She believes that he is really only looking for a way to steal the treasure located in the temple pool, and she banishes him. The boy has other plans for them though. At the same time, a crooked treasure-seeking trader conspires to get the booty for himself.. A major confrontation between good guys and bad eventually ensues with wild accusations flying like palm fronds in a hurricane. The shark hunter is accused of murder and imprisoned. Once again, the brave boy comes to his rescue and together they set out to prove his innocence. The story reaches its climax at the great temple that gave the island its name. A terrible earthquake ensures that the villains get their due.

There are no featured reviews for White Savage (White Captive) at this time.