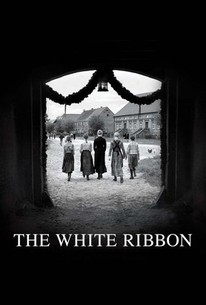 Critics Consensus: The White Ribbon effectively utilizes tension and a bleak atmosphere to deliver a thought-provoking examination of nascent fascism.

Critics Consensus: The White Ribbon effectively utilizes tension and a bleak atmosphere to deliver a thought-provoking examination of nascent fascism.

Critic Consensus: The White Ribbon effectively utilizes tension and a bleak atmosphere to deliver a thought-provoking examination of nascent fascism.

Set in a Northern German village before World War I during the decline of the Austro-Hungarian empire, depicts the emergence of national socialism.

Christian Friedel
as The Schoolteacher

Ulrich Tukur
as The Baron

Ursina Lardi
as Marie-Louise, the Baroness

Michael Kranz
as The Tutor

Burghart Klaussner
as The Pastor

Josef Bierbichler
as The Steward

Rainer Bock
as The Doctor

Susanne Lothar
as The Midwife

Branko Samarovski
as The Farmer

Ernst Jacobi
as The School Teacher, The Narrator

Florian Kohler
as Farmer
View All

Suffice it to say that I don't understand the rave reviews that this picture received, and I was not a happy camper when I left the theater.

As for Haneke's handling of the material, his directing is immaculate. Every moment is the product of a penetrating mind and a steady talent.

Far from enjoyable escapism, The White Ribbon is nonetheless utterly compelling and quite beautiful in its unsettling presentation of this prosaic evil.

The White Ribbon is a stark, contemplative and hauntingly brilliant film.

Writer-director Michael Haneke doesn't pull any punches, but then he doesn't throw any wild ones, either. His filmmaking shows precisely the sort of obsession with control that the movie itself is denouncing. Interesting, you've got to admit.

Haneke tells this tale a bit too patiently for my taste. But the metaphors are unmistakable, as is the power of the film's message.

The White Ribbon is one of the most gorgeous films in recent memory, with one of the blackest condemnations of human nature.

The White Ribbon may present difficult themes and have spiky edges and perhaps could not be described as entertainment but, as a piece of cinema, it is undoubtedly stunning.

Haneke both enthralls and repells us, luring us into a world where all feelings are buried deep beneath the quaint and idyllic surface.

Haneke's rigorous control of his material is so unerring, and the acting so eerily and chillingly perfect, it works simply as a portrait of this community at this particular time.

The themes, though sometimes applied heavy-handedly, have timeless meaning.

But along with a finely crafted screenplay, the film's truly brilliant touch, and what makes this nightmarish fable all the more effective and original, is its stunning black and white photography.

Michael Haneke has pushed the bounds of what is and could be considered going too far in the film medium, which is his whole mantra. He brings us The White Ribbon, something like if you took elements from The Crucible, Schindler's List, and Jesus Camp blended it together, and put it all in German with a drained out final image with a dash of fascism, unknown motives and religious fundamentalism. This extraordinarily stark and innovative film comments very boldly and brashly on "the origin of every type of terrorism, be it of political or religious nature." The acting is decidedly honest and quite life-like. The cinematography continues to add layers to the reality of the film and Haneke's direction couldn't be more appropriate to bring his screenplay to life. And the filmmaking style of this film is pure Haneke, utilizing long takes, tracking shots and manipulating the world in front of the camera to unsettle you and provoke thought, very few directors can achieve this multiple times, he achieved it with both renditions of his film Funny Games, and he most certainly did it here. Brava.

A nuanced, demanding film about small-town secrets that rivals the best stories of Alice Munro or William Faulkner, in which characters' lines are cutting, doom is just around the corner, and the individuals' respective stories continue to surprise as each reveals itself to be related to the others in larger frame, the life of a town (Eichwald) and the narrating school teacher. Great story, well told, and though it's lean (basically, one setting over one year, and a deservedly abrupt ending), there's a lot going on here, plot-wise and meaning-wise, with symbolism and metaphysical engagement to spare. Reminded me, too, of Hitchcock, in that the most horrific is the off-stage stuff, and for a reason that I hope is more than "because it's European and in black and white," Ingmar Bergman's The Seventh Seal... and, though set in pre-WWI Germany, it's a story that has no trouble resonating today because of its (unfortunately) universal subject matter. A worthy Palme d'Or winner that moves slowly but stays captivating all the way. Definitely a film you should see.

The White Ribbon is a dark, depressing account of human nature and innate, or learned, violence. Eerily beautiful, but the meanings and metaphors are too subtle, vague, and complex. Perhaps a metaphor to human nature itself? Enigmatic.

Michael Haneke's long, slow study of oppression and retribution is a real wonder. It's not an easy one to sit through, but I found it to be very compelling and worth seeing. The story concerns a Protestant village in Northern Germany on the eve of World War I, and the series of odd incidents that occur there over the course of a year or so. It's sort of mysterious, but not a complete enigma. It's not really a visceral or scary film, but the mood, tone, and atmosphere are that of dread, uneasiness, and creepiness. Credit for that goes to the gorgeous black and white cinematography, and two of Haneke's trademarks: lack of a film score, and numerous long, static shots. The narration also adds some nice insights and helps get to right mood going. The bulk of the unsavory stuff occurs offscreen, but even then, this film is really eerie. I liked that this was a period piece (especially of a time not often seen in films), and what it was about (the themes, that is). I'm not gonna lie though. I checked my watch more than once. However, I'm not going to say that I got bored, because I always found something to enjoy, even if the film does seem a little draggy at times. Like a lot of Haneke's work seems to be, this is a film that's not for all tastes, and seems to really divide audiences. I happen to really dig it, even if I don't want to watch it again anytime soon, or ever. I can really appreciate the artistry and the look at rural life during an interesting time in an interesting place.