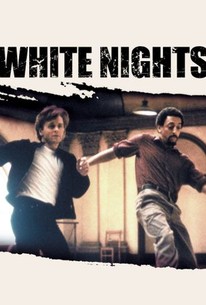 The fancy footwork and star appeal of Gregory Hines as Raymond, an exiled American, and the powerful grace of Mikhail Baryshnikov as Nikolai, a defector, combine with a great production design to carry this otherwise thinly-stretched tale of intrigue. With a stellar supporting cast (Isabella Rossellini as Raymond's wife, Helen Mirren as Nikolai's lover, and Jerzy Skolimowski, the Polish director, as a wily KGB agent), the film has a few excellent moments. Nikolai has defected from the former USSR some time in the past. While on a trip, his plane spectacularly crashes on a runway in Siberia. Trapped in the country he had escaped, he is brought to stay with Raymond, an American who defected during the Vietnam war. Nikolai desperately wants to get out of the country, but the Russians have other plans.

Andreas Markos
as Escamilla
View All

White Nights is made by people who seem much more comfortable with dance than with the requirements of the Hollywood thriller. It comes to life in the dance sequences, and then drifts away again.

A manipulative movie that spoils the few pleasures it delivers.

The in-between moments are interesting, and the dancing is spectacular.

This ended up being a pretty decent movie,nothing oscar worthy, but nobody can dance like they do,its brilliance. The story is pretty decent and interesting