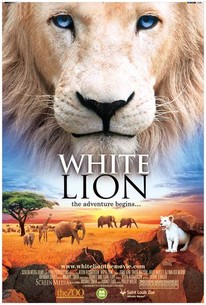 Destiny brings together a young lion and a young man in this drama from South African filmmaker Michael Swan. According to the legends of the Shangaan people of Africa, white lions are sacred creatures favored by the gods, and they're seen so rarely in the wild that when one is discovered, a Shangaan will be assigned to protect it. When a white lion cub is born near a Shangaan village, the other animals aren't sure what to make of the creature; the young lion named Letsatsi is rejected by its pride and must strike out on its own. Gisani (Thabo Malema), a Shangaan tribesman, learns that the white lion has left the wilds near his village and he follows Letsatsi to make sure the animal is safe and protect it from predators. An older lion named Nkulu makes friends with Letsatsi and shows the younger cat how to survive in the wild; meanwhile, Gisani takes a job as a hunting guide to support himself while staying in the wilds and keeping an eye on Letsatsi. However, when Nkulu is shot to death by a farmer and Letsatsi is targeted by one of Gisani's clients, the young warrior must take dramatic action to save the sacred lion. White Lion received its North American premiere at the 2010 Seattle International Film Festival. ~ Mark Deming, Rovi

Like the quasi-docs Duma, The Bear and Two Brothers, this adventure story about an albino lion both entertains and informs, albeit in modest measure.

One wonders whether this nicely photographed carnivore yarn has enough teeth to entice fans away from the free beastly behavior available on Animal Planet and the National Geographic Channel.

There are no featured audience reviews yet. Click the link below to see what others say about White Lion!