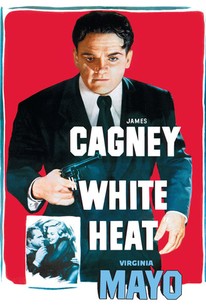 Critics Consensus: Raoul Walsh's crime drama goes further into the psychology of a gangster than most fear to tread and James Cagney's portrayal of the tragic anti-hero is constantly volatile.

Critics Consensus: Raoul Walsh's crime drama goes further into the psychology of a gangster than most fear to tread and James Cagney's portrayal of the tragic anti-hero is constantly volatile.

Critic Consensus: Raoul Walsh's crime drama goes further into the psychology of a gangster than most fear to tread and James Cagney's portrayal of the tragic anti-hero is constantly volatile.

This gangster movie centers on a psychotic, mother-obsessed thug.

Marshall Bradford
as Chief of Police

Robert Foulk
as Guard at Plant

Jack Worth
as Guard

Carl Harbaugh
as Foreman
View All

Brilliantly directed by Raoul Walsh, an old master of cinema hoodlumism, it returns a more subtle James Cagney to the kind of thug role that made him famous.

Cagney has an excellent supporting cast.

Raoul Walsh's heroes had a knack for going too far, but none went further than James Cagney in this roaring 1949 gangster piece.

Despite chronology (deranged by the censor's influence on the studios), this is really the fitting climax of the '30s gangster movie.

The simple fact is that Mr. Cagney has made his return to a gangster role in one of the most explosive pictures that he or anyone has ever played.

Oscar-winning actor James Cagney delivers one of his finest roles in Warner Bros. gangster drama White Heat after being away from the genre.

What a sad story that Cagney, a man of intelligence and taste, could not succeed making pictures of artistry and had to come back to Warners and make this tripe.

Before White Heat, no gangster film had featured anybody like Cody Jarrett.

The star of the show is undoubtedly Cagney, whose performance raises White Heat above typical cops 'n' robbers fare into an intense study of a psychologically troubled character.

Magnificent examination of the criminal mind and Cagney's finest moment.

Its archetypal influence on later films like Goodfellas and the Al Pacino Scarface is striking, even if we can never again experience how new and bold it was back in its day....

Bridging the gap between the gangster era and film noir is this doozy of a crime epic. Cody Jarrett is a real piece of work, he's a determined criminal with a strong desire to be 'on top of the world'. He's neglectful of his sultry wife, feverishly devoted to his doting mother, and actually finds glee when it comes to dishing out acts of violence, even upon his own gang of thugs. He also suffers from crippling migraines, which really seem to have an effect of his already fractured psyche. After inadvertently leaving clues behind following a railroad heist, Jarrett becomes a target of the feds. In order to cover his tracks, he willingly goes to prison on a trumped up charge. While there, he befriends a mole placed by the G-Men to infiltrate his gang. Jarrett and the mole escape from jail, and once out, they regroup the gang in order to pull off another masterful caper, unaware of the plans of the feds. This is a really stunning film, and definitely high on the list of best ofs in the genre. Raoul Walsh provides some strong, briskly paced direction, there's great camera work, and a fair amount of character study, depth, and food for thought. The action set pieces, especially the finale are superb, and through it all we get some terrific performances, dominated by the always impressive Cagney. If you're a fan of gangster films, or just love a great crime yarn in general, then this is a must-see.

Someone on IMDB called "White Heat" the bridge "between film noir and WB's classic gangster flicks", and I think it's a pretty apt description. It's the story of Cody Jarrett, psychotic gangster feared by everyone, and yet constantly looking over his shoulder as conspirators lie in wait at every turn (whether it be his right hand man, Big Ed, or the undercover cop, Vic Pardo). Cody the crackpot, with his phantom headaches and his obsessive fixation on his mother, you get the sense of impending doom lingering about his head. So what makes this film so noir-ish? Well, there's a certain amount of lurid fascination we the audience are made to feel with Cody's world, be it with his sleezy, back-stabbing wife or his disturbingly ruthless mother, it's all gritty and seedy. Characters like Pardo or "The Trader" (Cody's "manager") feel like they're ahead of their time in some ways, and we can still see echoes of them in modern day crime films. But it's James Cagney's Cody that steals the show. He's intense, intelligent, but maybe a little too trusting of those around him. His character is kind of pitiful in that he never sees betrayal coming until it's too late. It's a great performance and a great, if quirky crime noir that's right up there with The Big Sleep and The Big Heat (and other "big" movies, for that matter- well, except for Tom Hanks' "Big", obviously).

My favourite gangster movie, Cagney is brilliant as the crazy mama's boy gang leader. The ending is classic. I love it.

James Cagney stars as Cody Jarrett, a mother obsessed psychopath who breaks out of jail to plan a raid on chemical refinery, whilst unwittingly taking an undercover agent under his wing. Probably Cagney's most well known (and misquoted) character, Jarrett is one of the great gangsters from the old school. The addition of his Oedipus complex made him a whole different animal to his contemporaries, although I personally found his performance a little ripe in the earlier scenes of the film (when he has his headaches and finds out about his mother's death I couldn't help but be reminded of Norman Wisdom!) Once they break out of jail the film and his performance settle down though, and it becomes a masterful character study of a cold blooded hoodlum whose flippant use of violence and contempt for the law has passed into legend. The incredibly influential formula has been copied a million times over the years, not least by Tarantino in Reservoir Dogs and as such White Heat can be seen as a real watershed in the evolution of the crime drama. The cops are of course a little bland especially in comparison to Cagney's exuberant performance, but their use of oscillators and spectrographs must have made it the equivalent of CSI in its day. There is also some great support from Virginia Mayo as the classic gangster's moll, as ugly on the inside as she is beautiful on the outside and Margaret Wycherly as his hard-as-nails ma, and the spectacular finale in the refinery never fails to get the blood pumping. Classic stuff.