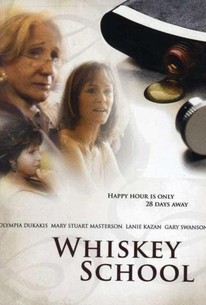 Drawing inspiration from the intervention of a well-known American playwright, director Peter Masterson's adaptation of the stage play by JoAnn Tedesco (who also wrote the screenplay) takes viewers on an emotional rollercoaster ride as one man's support system struggle to save their friend from his own worst enemy - himself. Leopold De Angeli is a highly intelligent playwright who is personable, intuitive, and sharp as a tack when he's sober. But these days sobriety doesn't come often to Leopold, and his friends are getting concerned. Everyone can sense the disaster that's looming just over the horizon, yet by confronting their friend about his alcoholism, everyone in this well-meaning group will have to face up to their own inner demons as well.

There are no critic reviews yet for Whiskey School. Keep checking Rotten Tomatoes for updates!

There are no featured reviews for Whiskey School at this time.