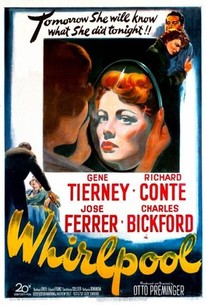 It is best to check one's logic in the lobby while indulging in the melodramatic machinations of Whirlpool. It all begins when Ann Sutton (Gene Tierney), the fashionable wife of a wealthy psychiatrist (Richard Conte), is caught shoplifting in a posh department store. She is rescued by erudite fortune-teller David Korvo (Jose Ferrer), who promises to cure her of her kleptomania through hypnosis. In truth, Korvo plots to use poor Ann as the cover for a complex murder scheme. In lesser hands, the film's bizarre climax might have been laughable: as handled by Jose Ferrer, however, it comes surprisingly close to believability. Adapted by Ben Hecht and Andrew Solt from a novel by Guy Endore, Whirlpool is directed with a delightful lack of restraint by Otto Preminger, who'd previously guided Tierney through the somewhat more credible Laura (1944).

Helen Westcott
as The Secretary

It's a fine example of the way Preminger, on occasion, managed to deflect routine melodrama into something more personal and profound.

There is no doubt that people will do strange things under hypnotic spell and that the techniques of hypnotism may be villainously employed. But you don't catch this fairly rational corner believing for one minute the hocuspocus that goes on.

Preminger's ambiguous relation to his characters and his sense of moral relativity have seldom been put to such haunting use.

A film that keeps me hooked for an hour and a half by combining police film noir and psychological thriller with a twisted plot about hypnotism, blackmail and murder. [Full review in Spanish]

Whirlpool's stand-out scene, in which a somnambulant Gene Tierney incriminates herself ... uses the conventions of horror cinema as much as that of noir.

Ferrer is wonderfully sleazy as Korvo and makes the perfect foil for Tierney.

Directed with a healthy feel for his twisted characters by Otto Preminger.

A daft premise does little to detract from the enjoyment of this tense, well-made murder mystery.

Tierney plays a woman who has kleptomania, and doesn't want her husband to find out. It's very thrilling, I liked it.

Not so great. Relies heavily on psychology practices from over half a century ago which ultimately dates it.