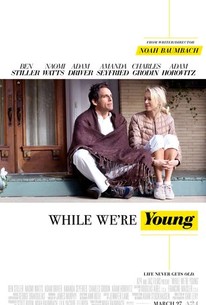 Critics Consensus: Poignant and piercingly honest, While We're Young finds writer-director Noah Baumbach delivering some of his funniest lines through some of his most relatable characters.

Critics Consensus: Poignant and piercingly honest, While We're Young finds writer-director Noah Baumbach delivering some of his funniest lines through some of his most relatable characters.

Critic Consensus: Poignant and piercingly honest, While We're Young finds writer-director Noah Baumbach delivering some of his funniest lines through some of his most relatable characters.

Noah Boaumbach's comedy While We're Young stars Ben Stiller and Naomi Watts as Josh and Cornelia, a childless New York married couple in their mid-forties. As their other friends all start having children, the couple gravitates toward a young hipster couple named Jamie (Adam Driver) and Darby (Amanda Seyfried). He's an aspiring documentary filmmaker, a vocation Josh already has. Soon the older couple begins enjoying the energy they feel haging out with the younger generation, but eventually Josh begins to suspect his new best friend might not be as straightforward and trustworthy as he thought. While We're Young screened at the 2014 Toronto International Film Festival.

News & Interviews for While We're Young

View All While We're Young News

Critic Reviews for While We're Young

Baumbach has a great sense of the ridiculous, and a sensitive instinct for keeping the attack under control.

The wonderful thing about While We're Young and the relationship that develops between Josh and Cornelia and Jamie and Darby is that it's less about resentment than it is a celebration of romantic love. At least initially.

While We're Young may provide the fusion of two disparate narrative packages but the glass is only half-full.

Baumbach, whose films include the searingly funny, autobiographical The Squid and the Whale and the brilliantly uncomfortable Margot at the Wedding, writes wry, sharp, poignant stuff.

Baumbach plays with universal themes about the uncertainty of aging, the elusive nature of "cool" and the acceptance that comes with settling down ...

For a while much of this contemporary comedy is great fun - until the party ends and you're ready for these people to go home.

An exhaustive and acid analysis on accepting the passage of time and leaving youth behind. [Full Review in Spanish]

It starts off as a familiar comedy of postmodern manners before opening up and embracing a wider world. Cheer up, it says to Gen X. Everybody's in the same boat. Get over yourselves.

While We're Young stumbles in pacing but contains a few sentimental moments and laughs that a mature crowd will enjoy.

It's rambling, tonally indecisive and contains no one as charming as Frances Ha, but this well-meaning spiritual sequel shines for its wry humour.

A mostly breezy movie that's mostly very enjoyable and would have been great save for the uneven drama that emerges near the end making the film more of a downer than it needed to be.

Features a great cast with a great idea, but an idea that is never fully realized. It's a pay off not worthy of the film's very good opening half.

Audience Reviews for While We're Young

Noah Baumbach is becoming an expert in this kind of quirky little movie centered on irritating characters who are seen as inexplicably adorable by the public (like Frances Ha), and even if it is funny and enjoyable, I really can't relate to most of its ideology that young people are idiots.

Annoyed me immensely, and when I read spoilers to see how it ended, I got even more annoyed. Amanda almost saves it, but there's other movies of hers I would rather watch. I found this insulting to both 20 somethings and 40 somethings alike. So apparently if you're a certain type of person in your 20's you are ridiculous and do stupid hipster things, and if you're over 40 and not a parent your life is pointless. This type of message just craps me to the point I couldn't finish it.

A middle-aged couple befriends a younger couple and embarks on a documentary project. Writer/director Noah Baumbach fashions a simple but affecting story contrasting youth and mortality, balanced with a rather pedestrian story about the making of a documentary. It's clear that he wants to explore the former group of themes and occasionally digress into pedantry about the nature of art in documentary films, but While We're Young's primary strength is that it avoids too much didacticism. Ben Stiller, Naomi Watts, Adam Driver, and Amanda Seyfried all give excellent performances, but it's Stiller who most clearly understands Baumbach's unique blending of character development and thematic exploration, and his performance is the most honed -- probably the result of his experience in other Baumbach films. The film's resolution (its final moments, not the genius send-up of "the great detective's reveal") is far too pat for my tastes, but that doesn't besmirch the fact that so much of what came before hit all the right notes. Overall, while not all that profound, Baumbach proves to be an excellent story-teller and fascinating artist.

In a strange twist on the classic narrative that "Amadeus" exposed, Noah Baumbach presents a comparison between the nostalgia of the old, and the appropriation of it by the young. As usual Baumbach touches upon a cultural touchstone in our present culture, which is whether to live authentically and be mediocre, or live a life based in aesthetics and remain false to yourself. Never has the "hipster culture" been better eviscerated than in this whip-smart satire. Read more at http://www.bluefairyblog.com/reviews/2015/7/25/while-were-young