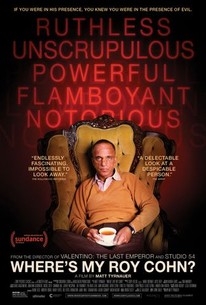 Critics Consensus: It's blunt rather than balanced, but Where's My Roy Cohn? does what it sets out to do, offering a disquieting summary of its subject's life and legacy.

Critics Consensus: It's blunt rather than balanced, but Where's My Roy Cohn? does what it sets out to do, offering a disquieting summary of its subject's life and legacy.

Critic Consensus: It's blunt rather than balanced, but Where's My Roy Cohn? does what it sets out to do, offering a disquieting summary of its subject's life and legacy.

One of the most controversial and influential American men of the 20th Century, Roy Cohn was a ruthless and unscrupulous lawyer and political power broker whose 28-year career ranged from acting as chief counsel to Senator Joseph McCarthy's Communist-hunting subcommittee to molding the career of a young Queens real estate developer named Donald Trump.

The documentary does a reasonable survey of his faults and foibles, lining up those willing to plunge a knife, but it's neither definitive nor detailed enough to satisfy even a minimum standard of proof.

Tyrnauer tells Cohn's story through interviews with family members and colleagues, and makes it very clear that he's indirectly telling the story of Trump. This exposé of "a personality in disarray" is a two-for-one deal.

The documentary tells the story of Cohn, his life and career, and it's a grim saga.

"Where's My Roy Cohn?" makes it clear that his influence is still felt today, all the way to the White House.

Where's My Roy Cohn? is brash and relentless, much like the man himself.

With all we know about this chillingly amoral, blackhearted man, Where's My Roy Cohn? still serves as a thorough and insightful history lesson...

There's nothing much new here, including the implication that Cohn was a key factor in the introduction of the combative, zero-sum style of modern politics. The film does manage, however -- maybe unintentionally -- to evoke a certain pity for Cohn.

If you've ever found yourself wondering how American politics attained its current level of crazed amorality, Where's My Roy Cohn? provides a few answers.

A brisk and interesting synopsis of man whose dogged pursuit of fame and power corroded any trace of personal morality.

The film suffers to some extent from having such an unsympathetic subject - and the attempts to humanise him only serve to make his actual behaviour seem venaler. It is, however, timely enough, and fascinating in a reptilian kind of way.

The film delivers high-speed tabloid journalism and rolls along swiftly. It's jammed with information that make shock the unknowing.

There are no featured reviews for Where's My Roy Cohn? at this time.