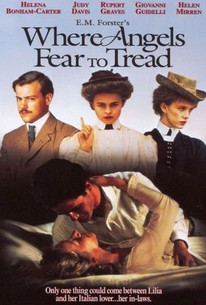 A wealthy, upper-class British widow marries a much younger Italian man with disastrous results in this turn-of-the-century costume drama based on the E.M. Forster novel. After marrying into a wealthy family and then losing her husband, middle-aged Lilia Herriton (Helen Mirren) suffers under the disapproving yoke of her haughty mother-in-law (Barbara Jefford). At the suggestion of family friend Caroline Abbott (Helena Bonham Carter), Lilia leaves her young daughter and in-laws for a holiday in Italy, where she falls in love with the penniless but handsome Gino Carella (Giovanni Guidelli). When she announces her plans to marry Gino, the family dispatches her brother-in-law, Philip (Rupert Graves), to prevent the union. But the alternately caddish and thoughtful Philip fails in his mission. Gino proves to be as charming to other women as he is to his wife, but he's genuinely bereaved when she dies in childbirth. Soon, Philip and his high-strung sister, Harriet (Judy Davis), arrive in Tuscany in an attempt to spirit away Lilia's son. But the principled Caroline turns up, determined to stop them, setting the stage for unexpected realizations and unforeseeable tragedy. Where Angels Fear to Tread reunites Bonham Carter and Graves, who co-starred in the previous E.M. Forster adaptation, A Room With a View. Each actor also starred in other Forster films: Bonham Carter in Howards End and Graves in Maurice.

Charlie Pinsent
as Girl in Cafe

Critic Reviews for Where Angels Fear to Tread

Where Angels Fear to Tread was released in England last summer, and has the misfortune to open here just before Howards End, one of the year's best films. If you have time to see only one Forster this year, Angels is not the one.

The story's constant and unexpected turns do provide rewards, but the real value of the film is in the richness with which it presents moral and emotional conflicts, laying them out with sensible realism and power.

A richly nuanced comedy of manners about the affect of a foreign country and its culture on two provincial souls.

Where Angels Fear to Tread is slow and deliberate, but the film is so absorbing that the audience won't mind.

Audience Reviews for Where Angels Fear to Tread

This was a pretty disappointing movie for me. It really just mimics and taps into the popularity of films like "A Room With A View", "The Importance of Being Eanrest", "Enchanted April" or even "The Painted Veil". Its mildly amusing, and pretty well acted, but that is about it. It always kind of surprises me to see Helena Bonham Carter is these type of roles. I realize they are what made her famous, but she is so much better as Marla in Fight Club, or as the Corpse Bride or the muderous Mrs. Lovett. As much as I would like too, I really cannot even say its worth watching; because its not.

Where Angels Fear to Tread Quotes