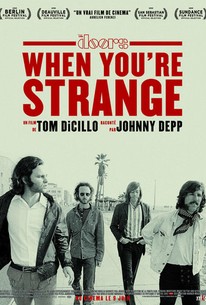 Critics Consensus: It's far from a critical assessment of the band's music or its legacy, but When You're Strange gives fans a beautifully filmed, lovingly assembled tribute to the Doors.

Critics Consensus: It's far from a critical assessment of the band's music or its legacy, but When You're Strange gives fans a beautifully filmed, lovingly assembled tribute to the Doors.

Critic Consensus: It's far from a critical assessment of the band's music or its legacy, but When You're Strange gives fans a beautifully filmed, lovingly assembled tribute to the Doors.

When You're Strange Photos

"When you're Strange" uncovers historic and previously unseen footage of The Doors and provides new insight into the revolutionary impact of its music and legacy. The film is a riveting account of the band's history.

News & Interviews for When You're Strange

Critics Consensus: Date Night Is An OK Night on The Town

View All When You're Strange News

Critic Reviews for When You're Strange

When You're Strange offers a worshipful but insightful portrait of the group...

This is a far better bet than Oliver Stone's ghastly Doors movie.

The cumulative effect of this film is to enhance one's respect for The Doors (John Densmore, Robby Krieger and Ray Manzarek) and to diminish the same for Morrison, whose posturing now looks like the most fatuous exhibitionism.

Director Tom DiCillo is relatively incurious about the bands' mundane professional and romantic lives, perhaps for fear of importing an injurious Spinal Tap irony. But his film material of Jim Morrison is sensational.

While the old adage says those who remember the '60s weren't really there, When You're Strange resurrects the spirit of the decade in a way that is at once intimate and universally familiar.

Those who will learn something from it can have no interest whatsoever in The Doors. This leaves its intended audience somewhat unclear.

Reaffirms Jim Morrison as a rock legend, a poet in his own rite and a spiritual and sexual messiah, who opened the doors of perception for his generation and all those to follow.

...it lazily recycles all the same tired myths about Jim Morrison being "like an ancient shaman," and "A rock and roll poet, dangerous and highly intelligent," that we've been reading in solipsistic '60s holdovers like Rolling Stone for the last 50 years.

DiCillo's film veers perilously close to hagiography. To those not under the singer's spell, [Jim Morrison] totters precariously between the charismatic and the ludicrous.

While fans of The Doors probably already know the story, this exploration of Jim Morrison's life and career is fascinating nonetheless.

Not many fresh insights, but riding along with The Doors is still a good time, whether you buy into the Jim Morrison mythology or not.

Barely scratches the surface of the band's enduring appeal.

Audience Reviews for When You're Strange

And the Doors legend continues to be happily milked. Just how many "Best of...," "Very Best of...," "Ultimate...," "Greatest Hits of..." anthologies are we up to now? The best reason to see "When You're Strange" is the footage from Morrison's obscure "HWY" film. These clips serve the new documentary so well that I hear some suspicious fans accused the director of using a stand-in actor. Nope, it's really the bearded Morrison wandering around those desert highways. I would have been quite excited to see this material, except that I coincidentally saw the entire "HWY" on YouTube quite recently (it's about 50 minutes long). Otherwise, "When You're Strange" is a mixed success. The narration is poorly written, and loaded with banalities. I felt embarrassed for Johnny Depp. I was also leery of all the "creative" syncs of *this* video with *that* audio from somewhere else...particularly the indulgent insertion of professional Doors fawner Jim Ladd in the beginning. The hoary documentary cliche of running casual footage in slow motion for artificial "portent" is also used to excess. There was some good material I hadn't seen before, though. Highlights included shots of the Soft Parade recording sessions, a scene with Morrison comforting a bloodied concert fan and a fine 1969 version of "The End." Otherwise, it's mostly flashes of informal, handheld clips which will provoke a smile here and there. Biographically speaking, I was surprised there was no mention of the controversy surrounding the string arrangements added to the Soft Parade album. There was also no time spent on what may be the greatest of all unanswered Doors mysteries: Why did Morrison's eyebrows turn so blonde near the end of his life?

Even with great music and rare footage, the documentary "When You're Strange" only manages to scratch the surface of The Doors. A lot of that is due to the narration in all its pretentiousness in trying to link the band to not only the youth movement of the 60's with unnecessary archival footage but also a Deeper Meaning.(Just don't blame Johnny Depp because he is only reading it. And with a William Blake reference hanging above it all, who else were they going to get?) If you're watching a documentary about The Doors, then you already know about the 60's. If you went to a Doors concert and dropped acid, then you might actually need a reminder or two. There is one bit of narration that is actually informative in pointing out the band's lack of a bass guitarist, adding to the band's unique sound which possibly inspired progressive rock bands to come. Sadly, the documentary is mostly only interested in Jim Morrison who apparently would have been happy just writing poetry on a beach somewhere(who wouldn't?), never quite planning as far ahead as the following week. Whereas the charismatic and mercurial lead singer contributed to a lot of The Doors' appeal, as Keith Richards wonderfully pointed out in his recent autobiography, a rock band is much more than just the lead singer.

A documentary about The Doors endorsed by the band and narrated by Johnny Depp- what's not to like? Much like Oliver Stone's film, this is very idiosyncratic, but it's far less bloated and a lot more truthful. There are similarities and parallels between the two (it's unavoidable), but here he viewer gets a more fair and balanced look at things. I love Stone's film, but it is best looked at as a wild fantastical myth that, while based in truth, is mostly an artistic roller coaster ride. This is maybe not as wild and entertaining, but I sure as hell enjoyed it. Getting to hear a more accurate version of thigns sure helped. I also liked that along with the archive footage, this film contained bits of Jim's own film HWY interspersed throughout. It added another layer of surrealism and heart to the proceedings. As for the narration- well, to me it makes perfect sense. Depp's voice blends marvelously with the music and atmosphere of the band. It was definitely an inspired choice to get his involvement. Perhaps one of the most interesting and moving inclusion of the film is a specia lfeature, It iis a combination of interviews with Jim's sister and his father. What is significant about this is that his dad had never one publcly spoken about his son until within the last five years. It seemed even more moving to me considering he died in 2008, thus the one time he publicly talks about his son, he has something honorable to say, thus having his life end in a nice way. Consider this a companion piece of sorts with the Oliver Stone film if you want. This is basically the anti-Stone version, thus it is what the band wants, but both offer a nice take on the band and its unforgettable center.

When You're Strange Quotes