When the Dragon Swallowed the Sun2012

When the Dragon Swallowed the Sun (2012) 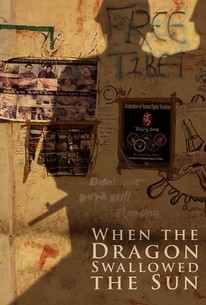 When the Dragon Swallowed the Sun Photos

A groundbreaking documentary that examines these questions in a quest to understand why the world is still dealing with unsettled issues like the Tibetan cause and what can really be done to eradicate them. Seven years in the making, When The Dragon Swallowed The Sun is the first inside look at the Tibetan movement to free Tibet from Chinese occupation, its internal conflicts and contradictions. The combination of full HD footage from India, China, Tibet and the US along with a prologue narrated by Dennis Haysbert and an original soundtrack by Philip Glass, Thom Yorke and Damien Rice make this the first film that presents the complexity of the struggle with such emotional impact. The film features Richard Gere, Archbishop Desmond Tutu, the 14th Dalai Lama, the newly crowned 18th descendant of the Great Religious Kings of Tibet, some of the most prominent Chinese contemporary artists, and all the key figures of the exiled Tibetan freedom movement and their followers.

Critic Reviews for When the Dragon Swallowed the Sun

You needn't disagree with the film's cause to feel oppressed by its propagandistic approach - not to mention Philip Glass's relentlessly mournful score.

A valuable though flawed documentary about the international movement to free Tibet from Chinese rule ...

Much of what people say here is maddeningly phased out in favour of oozingly self-righteous music by Philip Glass, precisely what Tibet does not need: an arty score.

A lengthy, demanding but worthwhile film ... admirably clear-headed about the deep splits within the Tibetan opposition.

It's all interesting if never quite absorbing and whilst the Dalai Lama himself is always good value, When the Dragon Swallowed the Sun is probably a film for those already sympathetic to the cause than an exposé to rally new supporters.

Tibet is doomed: that's the gloomy take-away from this lengthy, sporadically illuminating examination of the ongoing fallout from China's bloody 1950 occupation.

An extremely powerful documentary about Tibet's struggle for emancipation from China that's passionate in its plea and highly informative, although slightly bloated.

It's a fascinating study of the limits of protest, but also a disjointed film; each new witness shifts us further away from the central thread into increasingly dry political debate.

There are no featured reviews for When the Dragon Swallowed the Sun at this time.

When the Dragon Swallowed the Sun Quotes