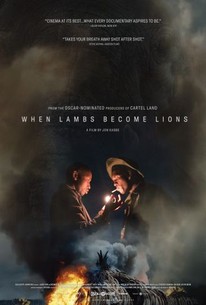 Critics Consensus: When Lambs Become Lions uses one family's difficult choices to untangle a complicated -- and enraging -- struggle over animal rights in Africa.

Critics Consensus: When Lambs Become Lions uses one family's difficult choices to untangle a complicated -- and enraging -- struggle over animal rights in Africa.

Critic Consensus: When Lambs Become Lions uses one family's difficult choices to untangle a complicated -- and enraging -- struggle over animal rights in Africa.

In the Kenyan bush, a small-time ivory dealer fights to stay on top while forces mobilize to destroy his trade. When he turns to his younger cousin, a conflicted wildlife ranger who hasn't been paid in months, they both see a possible lifeline. The plummeting elephant population in Africa has captured the attention of the world, and as the government cracks down, both poachers and rangers face their own existential crises--what is the value of elephant life relative to human life? And can we understand these hunters who will risk death, arrest, and the moral outrage of the world to provide for their families? Director Jon Kasbe followed the subjects of WHEN LAMBS BECOME LIONS over a three-year period, gaining an extraordinary level of access and trust on both sides of the ideological and ethical spectrum as he became part of their everyday lives. The result is a rare and visually arresting look through the perspectives and motives of the people at the epicenter of the conservation divide.

The material, however, has been artfully arranged into an epic personality clash between a swaggering poacher, simply known as X, and his nemesis, a sympathetic wildlife ranger called Asan.

Fewer fags and more facts would have made When Lambs Become Lions perfect. Still, its non-preachy stance is a revelation.

This is certainly a taut and well-filmed atmospheric piece.

[I]n the hands of documentarian Jon Kasbe, making his striking feature debut after a handful of short films, the movie is something far less binary, and far more intriguing.

Kasbe spent years among these people, and his movie is an intense 74-minute distillation of his dedication.

The story is so cleanly shaped that you suspect a bit of tweaking, but it's certainly fascinating.

Kasbe makes the most of his extraordinary access by presenting the film vérité style, preferring to immerse the audience in his characters' lives to better make the case for each of their choices.

The grey area between who is right and wrong feels like it has grown ten-fold by the end of the film.

Unfolding with the pace of a thriller, the film seems to promise conflict between its two main subjects yet as events develop viewers will find themselves increasingly uncertain of the direction it's going to take.

Ultimately, watching this film leaves you feeling a mixture of helplessness and despair.

It is here that the director takes a clear side, his film clearly denounces the extreme poverty that both the poachers and the rangers face.

There are no featured reviews for When Lambs Become Lions at this time.