When Jews Were Funny2013 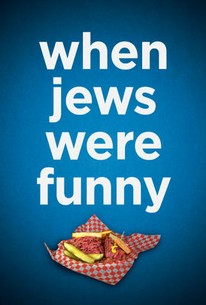 When Jews Were Funny Photos

Alan Zweig investigates the history of Jewish culture in America in the 20th Century by showcasing how the humor of the Hebrew people has evolved and stayed the same over a long period of time in his documentary When Jews Were Funny. He interviews a number of prominent and up-and-coming Jewish comics in order to get their opinion on if Jewish culture has fundamentally changed since Zweig was a child. Among the interviewees are David Steinberg, Shecky Greene, Andy Kindler, and Bob Einstein. Also included are vintage television performances by such legends as Alan King and Jackie Mason. When Jews Were Funny screened at the 2013 Toronto International Film Festival.

Critic Reviews for When Jews Were Funny

Zweig couldn't defer to a more insightful batch of interviewees.

Director Alan Zweig's own anxieties get in the way of his larger questions about humor and Jewish identity, leaving us with more yuks than nuanced ideas.

It's a jumbled purpose in a film that is otherwise rambling conversation with some grand old names.

On the whole, I think When Jews Were Funny is a strong testament to a lost age, a kind of elegy to the self-deprecation and introspection that certainly shaped in a major way modern comedy.

Audience Reviews for When Jews Were Funny

Excellent documentary on Jewish culture and humor. Some great jokes and profound observations, as well as some excellent clips of classic Jewish humor.

When Jews Were Funny Quotes