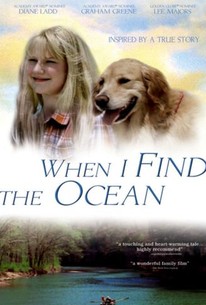 When I Find the Ocean Photos

Diane Ladd Lee Majors, Bernie Casey, and Amy Redford star in writer/producer/director Tonya S. Holly's childhood drama about a girl who leaves her loving family behind in order to overcome her fears and set her heart at peace. The year is 1965: Lily Strickland lives in Alabama with her loving mother Jenny (Redford) and her caring grandparents Thomas (Majors) and Edna (Ladd). Lily's father disappeared at sea years ago, yet his independent spirit lives on in the young girl who never lost her belief in dreams. After her husband died, Lily's mother refused to open her heart to another man. Only recently has Jenny allowed another man into her life, but Dean (Richard Tyson) has secrets that only Lily knows about. Lily may have never gotten the chance to say goodbye to her father, but now she feels him calling to her from the sea. Summoning the courage to strike out from her safe environment and seek out the answers that she cannot find at home, Lily befriends a kindly tugboat captain named Amos (Casey and sets out with her dog on the adventure of a lifetime.

Critic Reviews for When I Find the Ocean

Ill-conceived, poorly written, badly acted, and incompetently directed, this is a disaster from start to finish...

Audience Reviews for When I Find the Ocean

This is a pretty good film, the time frame is 1965 in Alabama. About a young girl who runs away from home to see the ocean. Being abused by her Mother's future husband, a non understanding Mom, and a loving grandfather are just some of the problems this young girl faces, so she leaves and leaves by boat going down river, she runs into Trappers, a Panther, and a Tug Boat Captain that saves her life. Lots of B acting and direct reading from cue cards over simple lines, but still a good movie. Could have left the racism out of the movie and the movie would have still been as enjoyable. But Still have to give the story line 3 1/2 stars

When I Find the Ocean Quotes