When Did You Last See Your Father?2008 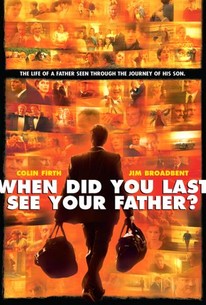 Critics Consensus: Sensitive to a fault, Tucker's adaptation of the Morrison novel is nonetheless solidly scripted and well-acted; guard your heartstrings.

Critics Consensus: Sensitive to a fault, Tucker's adaptation of the Morrison novel is nonetheless solidly scripted and well-acted; guard your heartstrings.

Critic Consensus: Sensitive to a fault, Tucker's adaptation of the Morrison novel is nonetheless solidly scripted and well-acted; guard your heartstrings.

When Did You Last See Your Father? Photos

Adapted from poet Blake Morrison's best-selling memoir by screenwriter David Nicholls and directed for the screen by Anand Tucker, And When Did You Last See Your Father? explores -- like its source material -- the complex, manifold emotional layers of a father-and-son relationship as it shifts and evolves over the passing decades. At the film's center is Blake Morrison himself, who for as long as he can remember has lived in the overarching shadow of his physician father, Arthur (Jim Broadbent) -- falling prey to feelings of embarrassment from the old man, as well as occasional awe. In the 1950s, when Blake (Bradley Johnson) was a child, the boy watched as Arthur partook in socially uncouth behavior such as wheedling his way into clubs to which he didn't belong, and carrying on an extramarital affair with the full knowledge of his wife, Kim (Juliet Stevenson). As the years passed, teenage Blake's (Matthew Beard) discomfort around his father hardened into resentment -- particularly when the adolescent boy expressed interest in a girl, Rachel (Carey Mulligan), who clearly preferred his father; compounding the situation, Blake then had to suffer through Arthur's decision to publicly humiliate his son in front of everyone. The central dynamic has changed for the two, however, by the late '80s, when Blake -- now married to Kathy (Gina McKee) and freshly established as a successful novelist and poet -- learns that Arthur has contracted terminal cancer. Now, the junior Morrison takes a headfirst plunge into the memories and recollections of his youth -- and grapples with the dynamic of his relationship with Arthur for the first time in his life as he comes face to face with the need to provide loving care for the old man.

News & Interviews for When Did You Last See Your Father?

View All When Did You Last See Your Father? News

Critic Reviews for When Did You Last See Your Father?

The winning aspect of this adaptation of a best-selling autobiography is in the director's management of the points of view.

Frustratingly stagnant at times but ultimately a moving story about a dying father and the son who must come to terms with him.

Firth gives one of his most stitched-up performances as the adult Blake. Maybe he overdoes it but I don't think so. His aloofness, with its awkward hesitancies and ragged bursts of feeling, means that it's all the more moving when he finally lets go.

Everything in Water Lilies is more guarded, more complex and far more interesting than it seems.

What ensures our pleasure is the dialogue, which is supple, and the quality of the acting.

It may be sentimental, but only in the best ways, and I defy anyone to not feel their eyes burn in the films final moments.

There are, alas, true weaknesses in this adaptation - too many close-ups of Colin Firth with tears in his eyes is one; too many mirror reflections are another - but it is neatly executed with a well-crafted script.

When Did You Last See Your Father? isn't so much a film by a director as a fantasy sprung straight from the mind of its narcissistic writer and subject.

...a disappointingly by-the-numbers drama that rarely lives up to the effectiveness of its performances.

A bore of a memoir.

A keen and candid subjective scrutiny of parenting through the eyes of a damaged offspring, but a relentlessly grim, insular perspective that rarely ventures outside those long festering psychological wounds.

Audience Reviews for When Did You Last See Your Father?

It's hard to come to terms with seeing your parents as they are as human beings instead of parents. Then having to deal with losing one of them forever at the same time. Well acted...

"When Did You Last See Your Father?" is a thoughtful, yet insubstantial, movie about why we should always appreciate our parents and never take them for granted, especially before it is too late. Case in point: Blake Morrison(Colin Firth), a poet, whose father Arthur(Jim Brodbent), a doctor, even embarrasses him as an adult, chatting up Salman Rushdie at an awards banquet(Wait a sec. Wasn't Rushdie in hiding in 1989? And that cell phone is all wrong for the year.) and wondering aloud if his son could not have found a more practical profession. However, naming him Blake pretty much guaranteed this.(Or he could have ended up a film director or a freedom fighter, I suppose.) Things take a serious turn when Arthur is diagnosed with cancer and given little time left, forcing Blake to recall what life was like when he was a teenager(Matthew Beard), blaming his lack of sexual activity on his father, turning the cliched father-son relationship on its head which has a tendency to be generational in popular fiction. In fact, Blake's reseveredness bordered on downright uptightness(and accompanying literary snobbishness) conflicts mightily with Arthur's outgoing demeanor which allowed him to enjoy adventures, so he could have stories to tell at the dinner table. At the end, I am left wondering what kind of father Blake turned out to be.

"A parent and a child. The past and the present. Memories and secrets. Can you know someone for a lifetime.... and not know them at all? The life of a father. Through the journey of a son." As poet Blake Morrison (Colin Firth) visits his dying father (Jim Broadbent), he remembers the feeling of being overshadowed by his gregarious dad. Blake's conflicted memories roam back and forth through the 1950s, the '60s and then the late '80s , the last in which Blake is a married man with a career of his own. Review Blake Morrison's memories are served for public consumption in a respectful but slightly confused rendition. Jim Broadbent delight us, once more, with his overgrown child of a father that seems a figment of her son's imagination. His childishness seems to be his only flaw. I couldn't help but being reminded of Tim Burton's "Big Fish" this time, with radically different flights of fancy. Colin Firth plays the writer/son as a crashing bore. Was that on purpose? I've been longing to see Firth again in parts like the ones he so amazingly captured - "Apartment Zero" comes to mind. Here earnest or not earnest, loving, selfish and so forth I didn't quite get myself interested enough to care as much as I feel I should have. Matthew Beard, the younger Blake and Juliet Stevens as the mother, manage to create more intriguing characters. The film, however, belongs to Jim Broadbent - His character is a loving mix of assorted British loving eccentrics. The fact that this is the way her son Blakes remembers him, makes the experience worth while.

The whole father-dying-and-son-not-able-to-forgive-father's-past-infidelities thing has been milked past all recognition for the last few years, and I originally dismissed this movie as another sub-par derivative that probably stemmed from Tim Burton's Big Fish (possibly earlier, but I'm not that well-informed) in 2003. But it was weird how this movie affected me. Writers tend to focus on this topic because it's something we all go through - we all have issues with our parents and we think it's going to end sometime and eventually everybody will be friends but all of a sudden it is too late and your dad's dead and you're still harboring all this ill will with no outlet to let it go. And I guess it's like how everybody likes to focus on the coming-of-age story even though it's been overdone and very rarely is a "spin" done on it nowadays because even the permutations have been exhausted. But still filmmakers keep on churning them out and they're not bad at all. This is a different kind of coming-of-age where the author has matured already but there's that one arrested development inherent in parental relationships that still makes them a child. It's funny but the scenes that resonated with me most were among the most cliched - the ash scattering almost jubilant in nature, the tight tear-filled hug upon the son's graduation, the drive around the sand with the opera (naturally, it's got to be opera, right?) swirling all around your ears. The movie was only like 90 minutes long but sometimes it felt like three hours, but that didn't necessarily make it bad...just slow. I like the British feel of it, the little humorisms and outfits and way of walking, it made me feel like I was inside a foreign film without the subtitles. And it had heart, because it was about a subject probably very near and dear to the author. I can identify and I think the time period of my life I was going through amplified the affect the movie gave me. Uneven, long, but definitely resonant.

When Did You Last See Your Father? Quotes