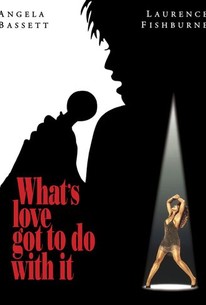 Critics Consensus: With a fascinating real-life story and powerhouse performances from Angela Bassett and Laurence Fishburne, What's Love Got to Do With It? is a can't miss biopic.

Critics Consensus: With a fascinating real-life story and powerhouse performances from Angela Bassett and Laurence Fishburne, What's Love Got to Do With It? is a can't miss biopic.

Critic Consensus: With a fascinating real-life story and powerhouse performances from Angela Bassett and Laurence Fishburne, What's Love Got to Do With It? is a can't miss biopic.

What's Love Got To Do With It? Photos

What's Love Got to Do With It? is the filmed biography of R&B/pop singer Tina Turner (Angela Bassett), documenting her efforts to break away from her abusive husband Ike (Laurence Fishburne). After a few scenes detailing Tina's life as a young singer in Nutbush, TN, she's discovered by Ike Turner, an already established songwriter, guitarist, and record producer. Ike takes Tina under his wing and makes her a star, but her fame makes him jealous and abusive, and she has to struggle to break free of his domination. ~ Stephen Thomas Erlewine, Rovi

Morris O'Connor
as The Kings of Rhythm

Larry Washington
as The Kings of Rhythm

Joe Allen Price
as The Kings of Rhythm

Michael Sessions
as The Kings of Rhythm

L. Van Taylor
as The Kings of Rhythm

Sonya Hensley
as Woman in Audience

Leslie Thurston
as Woman in Audience

Eartha Robinson
as Woman in Audience

Kate Lanier
as Stripper on Balcony

Ronnie Turner
as The Revue

Michael Butler
as The Revue

Greg Cook
as The Revue

Michael Smith
as The Revue

Brian Cayle
as The Revue

Darrel Richards
as The Revue

Walter Davis
as The Revue

Richard B. Livingston
as Manager #3
View All

News & Interviews for What's Love Got To Do With It?

View All What's Love Got To Do With It? News

Critic Reviews for What's Love Got To Do With It?

A powerful portrait of emotional endurance, propelled by the outstanding performances of Bassett and Fishburne, both of whom lend a crucial dimension to the gradual redundancies of Kate Lanier's otherwise insightful screenplay.

Their nuanced performances give a spectrum of emotional shadings to a black-and-white script that casts Tina as the Beauty to Ike's unreconstructed Beast.

Angela Bassett is a wonderfully sympathetic screen presence who may have a big career ahead of her.

Fishburne's astonishing portrayal of Ike is what holds the movie together. The actor builds, in precise increments, a devastating portrait of a macho control freak; he even finds a kind of ghastly humor in the character's madness.

Though the picture rightfully belongs to Bassett, a final word must be said about Fishburne, who never fails to make Ike seem human if not defensible. Even in defeat, he is remarkably compelling.

Brian Gibson, who directed the script by Kate Lanier, seems to have trouble taking charge of his material as he skips through the years.

Bassett ignites into a major star, a dazzling supernova, with her bravura acting and dancing as Tina Turner, a submissive wife who finally fights.

Complete with the rock star wigs, superhero body and slightly timid but ever so deliberate snarl in her speech, Bassett embodied the icon during her slow and steady rise to fame, and her tumultuous marriage...

What`s Love Got to Do With It is sizzling film fare.

[Fishburne's] performance is the one X factor in What's Love Got To Do With It, which in most respects is an entertaining if conventional pop star biography.

Basset genuinely holds your sympathy as the little country girl Anna Mae Bullock, singing and suffering her way to superstardom and personal liberation, [and] Fishburne is sensational.

Audience Reviews for What's Love Got To Do With It?

Angela Bassett looks nothing like the real Tina Turner physically, but it is really impressive how she embodies her character so perfectly, moving, singing and dancing just like her in this inspiring biography that also benefits from an astounding performance by Laurence Fishburne.

A powerful and shocking portrayal of the book "I, Tina", that bring a terrific acting of Bassett and Fishburne. Fresh.

The life story of Tina Turner, from her rise to fame with Husband Ike Turner, to the domestic abuse she suffered and the courage of the woman who reinvented herself and became a star in her own right. Angela Bassett lives and breaths Tina Turner in her interpretation of the well-known singer. Larry Fishburne was so unlikable, he played his part well.

Fantastic film about a triumphing woman! And so quotable.."I don't want the cake Ike!"

What's Love Got To Do With It? Quotes