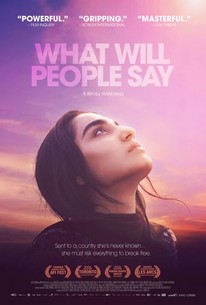 Critics Consensus: What Will People Say? argues that institutional sexism starts at home -- and the results can be as powerful as they are difficult to watch.

Critics Consensus: What Will People Say? argues that institutional sexism starts at home -- and the results can be as powerful as they are difficult to watch.

Critic Consensus: What Will People Say? argues that institutional sexism starts at home -- and the results can be as powerful as they are difficult to watch.

Sixteen-year-old Nisha (Maria Mozhdah) lives a double life. When out with her friends, she's a normal Norwegian teenager. At home with her family, she is the perfect Pakistani daughter. But when her father (Adil Hussain) catches her alone with her boyfriend in her room, Nisha's two worlds brutally collide. To set an example and escape the judgment of their peers, her parents send Nisha against her will to a small town in Pakistan to live with extended family. There, in an unfamiliar country surrounded by people she barely knows, Nisha must adapt to a rigid culture that denies her the freedoms she once enjoyed. Winner of Audience Awards at AFI Fest and the Les Arcs European Film Festival, WHAT WILL PEOPLE SAY is a tense and moving drama about women's rights, immigrant identity, and familial duties. Based on director Iram Haq's own experiences as a young Pakistani woman in Norway, it features an astounding debut by 18-year-old Mozhdah and a nuanced performance by veteran actor Hussain (LIF

Lalit Parimoo
as Uncle
View All

Skyscraper Is Too Short on Story to Stand Out

A real-life terror trip but with human ghouls and goblins.

The movie becomes something more than just another tale of cross-cultural, cross-generational misunderstanding: a harrowing drama of emotional abuse.

As the Norwegian snow gives way to sunbaked Pakistani desert on screen, you'll feel a tug between the awful and the artful

The quiet psychological terror and the simple, blunt manner in which it was shown stole my breath.

A blistering drama about the kind of culture clash that can traumatize a young woman for life.

What Will People Say provides surprising moments of tenderness amid heart-pounding drama.

While the movie itself is about as subtle as a brick to the head, the actress brings vulnerability and tenderness to her role, and generates empathy through her performance.

The film's title was chosen with care, because community judgement looms large in this film...

A riveting drama about the toxic energy that fundamentalists can unleash on those they want to control.

Haq soon levels one torture after another on Nisha, sacrificing nuanced storytelling for blunt force trauma and reducing everyone that isn't Nisha into caricature.

There are no featured audience reviews yet. Click the link below to see what others say about What Will People Say? (Hva vil folk si)!