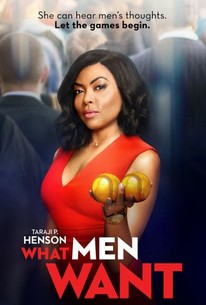 Critics Consensus: Admittedly uneven but easy to like, What Men Want proves a gender-swapped remake can work -- and the odds are substantially improved with Taraji P. Henson in the lead.

Critics Consensus: Admittedly uneven but easy to like, What Men Want proves a gender-swapped remake can work -- and the odds are substantially improved with Taraji P. Henson in the lead.

Critic Consensus: Admittedly uneven but easy to like, What Men Want proves a gender-swapped remake can work -- and the odds are substantially improved with Taraji P. Henson in the lead.

Inspired by the Nancy Meyers hit romantic comedy WHAT WOMEN WANT, this film follows the story of a female sports agent (Henson) who has been constantly boxed out by her male colleagues. When she gains the power to hear mens' thought, she is able to shift the paradigm to her advantage as she races to sign the NBA's next superstar

News & Interviews for What Men Want

The 69 Most Anticipated Movies of 2019
The LEGO Movie 2: The Second Part Is Certified Fresh

View All What Men Want News

Critic Reviews for What Men Want

What begins as a standard gross-out affair (with a prosthetic #MeToo limb clumsily grafted to the body) ends in a treacly, glib, made-for-TV wasteland.

As a film it is almost impossible to place on the ideological spectrum...Yet, from the first few scenes of this crackpot endeavour, it becomes blatantly obvious that it might not even matter. Because it is funny. And it is good.

Henson brings a charge of energy to every scene and there are some funny moments.

What Men Want is pure shrug cinema: not bad so much as wispily superfluous, which may not come as a surprise if you can recall the similarly disposable 2000 original.

The plot is predictable to the last programmed giggle. But Henson is pretty terrific; if you can stand comical histrionics done with style while pitched to high C, amplified to triple-f and played by the full personality orchestra.

All in all, this bland, overlong film swings and misses way more often than it connects.

A dim, grim and irritating farce, on a two-hour search-and-destroy mission for your sense of humour.

Taraji P.Henson is entertaining but is better than this material. The breakout star though is Erykah Badu.

One of these days, someone's going to write a leading role worthy of Taraji P. Henson.

Audience Reviews for What Men Want