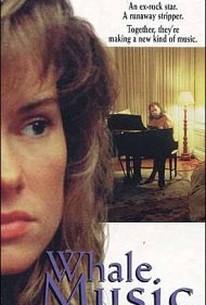 A Canadian production shot along the British Columbia coast, this is the story of a washed-up rock star who finds redemption. It was adapted for the screen by Paul Quarrington from his own award-winning novel. Desmond Howl (Maury Chaykin) is a faded music superstar who now lives a hermit's life in an out-of-the-way oceanside mansion. Living off residuals from previous hits, Howl spends all his time and energy in his state-of-the-art home recording studio trying to compose whale music. He hopes to write a symphonic piece, using the whales' own sounds, that will have the power to summon the marine mammals from the depths. Howl is haunted by hallucinations and nightmares involving his brother Paul, who recently died, apparently by his own hand. Howl also has to deal with his ex-wife, who meddles in his affairs. He manages to shut out these interferences until a young runaway arrives at his doorstep. Claire Lowe (Cyndy Preston) gradually captures the jaded musician's heart with her need for caring, and their relationship becomes a metaphor for the tender music Howl is trying to create. ~ Michael Betzold, Rovi

Paul Quarrington
as Pete the Bartender

There are no critic reviews yet for Whale Music. Keep checking Rotten Tomatoes for updates!

There are no featured reviews for Whale Music at this time.