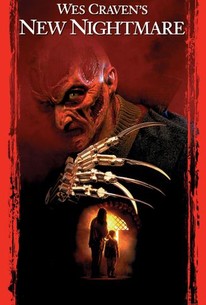 Critics Consensus: Wes Craven's New Nightmare adds an unexpectedly satisfying - not to mention intelligent - meta layer to a horror franchise that had long since lost its way.

Critics Consensus: Wes Craven's New Nightmare adds an unexpectedly satisfying - not to mention intelligent - meta layer to a horror franchise that had long since lost its way.

Critic Consensus: Wes Craven's New Nightmare adds an unexpectedly satisfying - not to mention intelligent - meta layer to a horror franchise that had long since lost its way.

Freddy Krueger is back from the grave in another thriller from famed horror director Wes Craven. This film differs from other films in the Nightmare on Elm Street series in that the movie pokes fun at the earlier episodes and at Wes Craven himself. The film, while technologically advanced, is not as gory as earlier films. It is also interesting that most of the actors portray themselves. Freddy was supposed to have died in the last film, Freddy's Dead -- The Final Nightmare. But while the character's body died, the evil that drives him did not and so returns in Freddy's form to haunt Craven into producing another film. Unfortunately the lead actress of all the previous films, Heather Langenkamp, refuses to do another "Freddy" film. Freddy then comes after her, first killing her husband, and then taking grisly aim upon her son Dylan (portrayed by a different actor).

Marianne Maddalena
as Herself

Sam Rubin
as Himself

Sara Risher
as Herself

Robert Shaye
as Himself

Nick Corri
as Himself

Tuesday Knight
as Herself

John Saxon
as Himself

Lin Shaye
as Nurse with Pills

This one's defeated by the rigid formula.

Englund once again is in bravura form as Freddy, playing as much for nasty laughs as unnerving shocks.

The climactic punch-up fails to match the power of the first film's true ending, but in deconstructing his own bastardised creation, Craven redeems both the series and his own tarnished reputation.

An ingenious, cathartic exercise in illusion and fear.

An intricately constructed horror film, it not only takes you to hell and back, but thoroughly engages the mind as well as the emotions.

I haven't been exactly a fan of the Nightmare series, but I found this movie, with its unsettling questions about the effect of horror on those who create it, strangely intriguing.

Just when you thought that Freddy Krueger's antics were exhausted, Wes Craven's New Nightmare arrives with a worthy epilogue. [Full Review in Spanish]

Toning for the unconditional fan and Valium for the skeptics. [Full Review in Spanish]

A breath of fresh air that in a way is a direct predecessor to 'Scream.' [Full Review in Spanish]

Wes Craven's New Nightmare is a gust of fresh air in the stale crypt of the horror movie.

This is the finale Freddy deserved and Wes Craven delivered.

I bought a box set of 7 of these movies and have been slowly watching them. Got to admit, it's been longer and longer between movies as the quality of the sequels deteriorates. I think it's been well over six months since the last one. Finally tonight decided to take out the last of the movies as I felt like watching a horror. I actually would have watched this a lot sooner if I had known it would actually be good! Nancy is once again the main character. She is now an actress with a young son. Suddenly she is receiving threatening phone calls and she and her son are having nightmares. It seems the presumed dead Freddy is back! Very decent addition to this franchise. Nancy is a good character and it's fun to see Robert England play himself as well as Freddy. It is more revolting than scary, but some of it actually does manage to be creepy. I liked how they linked it to Hansel and Gretel too.

The idea of mixing fantasy and reality is interesting and creepy, as is most of this efficient film, aiming at the terror that marked the original and leaving out any humor of the many sequels. An adequate conclusion to the hit series.

A bizarre, delicious challenge to the slasher formula that, though not entirely successful, offers something truly new to the genre. More later