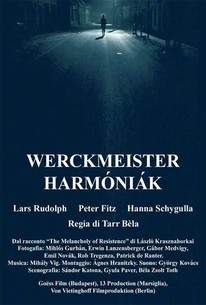 Bela Tarr follows up on his seven-hour epic Satantango, considered by some critics as one of the finest films of the 1990s, with this elegant, haunting work about the cycles of violence that have dogged Eastern European history. Jancos (Lars Rudolph) is a wide-eyed innocent who works as an occasional postal worker and as a caretaker for Mr. Ezster (Peter Fitz). An outsider and a visionary, he marvels at the miracles of creation, from the planets rotating in the heavens to the sundry animals on earth. One day, a circus featuring jars full of medical anomalies and a massive dead whale entombed in a corrugated metal trailer visits Jancos' economically depressed village. Another more sinister attraction is a shadowy figure dubbed "The Prince," whose nihilist rants incite the town's disaffected to riot. Not long afterwards, Mrs. Ezster (Hanna Schygulla) cajoles her estranged husband to join a citizen's action group against the circus, threatening to move back into his house if he doesn't play along. Tension in the town builds until, after one of The Prince's hate-filled speeches, throngs of angry men with blunt instruments ransack and brutalize a men's hospital ward. When the dust clears, lives are irrevocably changed. This film was screened at the 2000 Toronto Film Festival. ~ Jonathan Crow, Rovi

Tamas Wichmann
as man in the sailor-cap

József Ropog
as man beside the man in the fur-cap

Sándor Bese
as The Prince

Attila Kaszas
as The Prince (Voice)

As wearying as the film becomes in its long, bleak sequences, its uniquely cinematic and emotion-charged experience makes the effort worthwhile.

Bela Tarr's style seems to be an attempt to regard his characters with great intensity and respect, to observe them without jostling them, to follow unobtrusively as they move through their worlds, which look so ordinary and are so awesome, like ours.

A chilling, mesmerizing, intense account of ethnic cleansing (in spirit if not in letter) from Hungarian master Bela Tarr.

Over two hours and 20 minutes, not much actually happens, and Tarr creates a mood so lulling that even the rare scenes of dialogue can be hard to follow. But Werckmeister's standout moments are searing like few others in film history.

Densely symbolic, yet never inaccessible, this is artistically unique and overwhelmingly powerful.

This is as challenging as movies come, alluding to everything from philosopher Thomas Hobbes to the history of Western music. But compared with Tarr's legendary Sátantángo... it's almost a quickie.

Whatever your response, there's no doubting the technical brilliance of one extended sequence, as a mob rampages through a hospital before being halted by an unexpected vision. Astonishing.

A mesmerizing eulogy to the waning days of artistic beauty and free speech, and not to be missed.

The thing is, and this is easy to lose sight of in conversations about tracking shots and pointedly empty acting and symbolic cetaceans, [this] is an extraordinarily pleasurable experience to watch.

Bela Tárr reaches the point of formal perfection with this spellbinding allegory about foreign occupation composed of 39 masterful long takes, a thematically thought-provoking film that is more well structured than his previous works and has a wonderful score by Mihály Víg.

You Europeans can pretend to like this shit all you want but you are not fooling me, no sir.

I am in total awe with this movie. Total awe. A decadent, surreal, introspective masterpiece. Words can not even begin to describe how fully affected I was by this movie. The directing was fucking incredible - every single second of every single frame was filled with purpose, the director had a tendency of staying with a scene for minutes, even, after a main character leaves the frame, no matter how minimal the action, that I found ingenious. The director was not afraid to get as close as possible to show the beauty in every human face, no matter how imperfect, and to stay with his characters' movement. No matter how repetitive, these shots always worked, especially when the actors filled the pregnant silence with their expressions or just mere presence. There were so many incredible shots, all of them more than notable. I also loved how the camera was almost constantly in movement, there were few completely still shots. The actors were brilliant, especially the lead - he had a quiet, intense dignity reminiscent of someone like Klaus Kinski that fascinated me. The story was surreal and so bloody potent, the final shot had me in tears not from any particular emotional drag but from the mere beauty of it and the power of what I had just witnessed. By all means, this is not for everyone, it requires a lot of patience. This is not just entertainment, this is a film that absolutely requires you to think about what you are viewing and ask questions, even if they aren't answered right away. But it is the most amazing film I have seen in quite some time, and has instantly become a favourite.