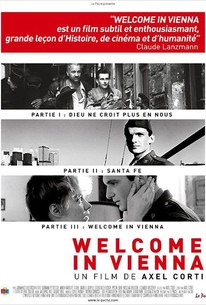 The award-winning Austrian film Welcome in Vienna unfolds a true story that has long been shunted aside by military historians. The film concerns those Austrian and German immigrants who fought with the American forces during World War 2. Specifically, the story deals with Austrian Jew Freddy Wolff (Gabriel Barylli) and German intellectual Adler (Nicholas Brieger). Wolff must contend with the anti-Semitism of his German-American sergeant (Joachim Kemmer), while Adler is ideologically drifting towards communism. The shock of meeting old friends on the "other" side and of finding that their homes no longer exist as they remember them are only some of the additional challenges faced by the two protagonists. Upon its first release, Welcome in Vienna stirred up a small controversy by suggesting that the Austrian people were not merely the helpless victims of Nazi tyranny, but were as responsible as any individual "fifth columnist" in helping Hitler overwhelm the rest of Europe. ~ Hal Erickson, Rovi

The statement gains power from the black-and-white photography of Gernot Roll and the art direction of Fritz Hollergschwandtner.

There are no featured audience reviews yet. Click the link below to see what others say about Welcome to Vienna (Wohin und zurück)!