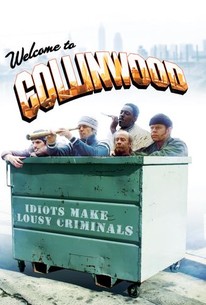 Critics Consensus: Contains some funny moments, but it's still a very lightweight comedy.

Critics Consensus: Contains some funny moments, but it's still a very lightweight comedy.

Critic Consensus: Contains some funny moments, but it's still a very lightweight comedy.

A group of likable losers try to pull of what by their standards seems like a major heist in this offbeat crime comedy, loosely based on the classic Italian caper comedy I Soliti Ignoti. A group of sad sacks living in a rundown neighborhood in Cleveland all have one thing in common -- they need money, and aren't especially fussy about how they get it. Riley (William H. Macy) is a guy whose wife has been sent to jail, leaving him to look after their baby, when she's unable to pay a fine. Pero (Sam Rockwell) is in love with a beautiful girl (Jennifer Esposito) who has a roving eye, and he's convinced that a bigger bankroll would help him win her heart. Leon (Isaiah Washington) is a hipster who wants to keep his sister, Michelle (Gabrielle Union), out of trouble. Basil (Andrew Davoli) is a guy with bad luck, and eyes for Michelle. And Toto (Michael Jeter) is a small-time crook looking for something to do -- if it's profitable, all the better. Someone gets the bright idea that a robbery might be the answer to everyone's problems, and with the help of Jerzy (George Clooney), a safe-cracker confined to a wheelchair, they set out to find the right target. Welcome to Collinwood was the first feature film from the writing and directing team of Anthony Russo and Joe Russo; filmmaker Steven Soderbergh and co-star George Clooney served as producers.

Annie Kitral
as Nun No. 1

Lissy Gulick
as Nun No. 2

Dorothy Silver
as Nun No. 3

Rohn Thomas
as Janitor
View All

Critic Reviews for Welcome to Collinwood

Welcome to Collinwood has an eccentric, humorous beat and such beautiful characterisation that, even at a brisk 83 minutes, you end up caring about the characters even as you accept that their every effort is doomed to failure.

The mugging is heavy-duty stuff; but its aimless geniality ultimately wins one over.

Enjoyably dumb, sweet, and intermittently hilarious -- if you've a taste for the quirky, steal a glimpse.

It doesn't quite work, but there's enough here to make us look forward to the Russos' next offering.

Collinwood seems like a series of sketches, with caricatures instead of characters.

The picture runs a mere 84 minutes, but it's no glance. It's a head-turner -- thoughtfully written, beautifully read and, finally, deeply humanizing.

This is a great robbery farce enforced by excellent writing and great acting from a stellar cast.

An occasionally amusing but completely disposable comedy of errors that's not nearly as funny as it thinks it is.

Collinwood is certainly one dimensional, but it's a nice dimension. Pleasant. Smile-inducing. Fun.

The film looks and sounds bright and bouncy, and it's full of reliable old comic devices like characters absurdly repeating themselves and asking incredulous questions.

It's excessively quirky and a little underconfident in its delivery, but otherwise this is the best 'old neighborhood' project since Christopher Walken kinda romanced Cyndi Lauper in The Opportunists.

Audience Reviews for Welcome to Collinwood

Entertaining and funny, Welcome to Collinwood is a nice film to watch, but certainly is very weak and poor; what make the original Italian classic comedy "I Soliti Ignoti" much more better.

A gang of down at heel petty crooks inherit what they think is a perfect crime but in execution, things do not go as smoothly as they'd hoped. A kind of Ocean's Eleven for losers, Welcome To Collinwood is a comic heist film that smacks of trying way too hard. I was not surprised to learn it was a remake of a European film because of the broad slapstick and forced wackiness of the whole idea (Jerry Lewis is still one of the most popular comic actors on mainland Europe. Draw your own conclusions...) The cast are all OK and there is little here that offends, but the Clouseau-esque heist is typical of the tone of the whole film; ridiculous coincidences, surreal situations, heavy handed farce and slapstick that plays wholeheartedly for the cheap seats. It's not awful, but with the talent involved I expected a whole lot more.

What a freak show of nut cases...