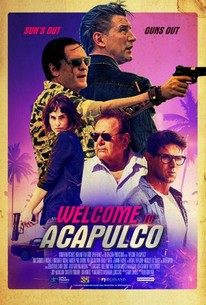 Video game designer Matt Booth has one shot to save his career by unveiling his biggest project yet at the Video Game Awards in New Mexico. But after running into a friend at the airport and having a little too much to drink before his flight, he ends up in ACTUAL Mexico -- specifically, Acapulco. As soon as he lands, he finds himself on the run from high-powered criminals, deadly hitmen and the Feds, all looking for a mysterious package that he has allegedly smuggled through customs yet knows nothing about. Partnering with a badass, beautiful femme fatale and channeling his inner video game action hero, the pair unravels a conspiracy that could shake the foundation of the United States, maybe even the world.

Critic Reviews for Welcome to Acapulco

A questionable storytelling device dooms Welcome to Acapulco, an action comedy that quickly becomes a grueling and tiring watch.

Unfortunately, by centering everything on an unlikeable lead [character] who keeps stopping the story for his own needs, all the good gets lost.

Welcome to Acapulco - at least partially - warrants your investment. It may not reach levels of great trash, but it sure aspires to such, and is always watchable, if only for the sight of thespians hamming it up for a buck.

Audience Reviews for Welcome to Acapulco

There are no featured audience reviews yet. Click the link below to see what others say about Welcome to Acapulco!