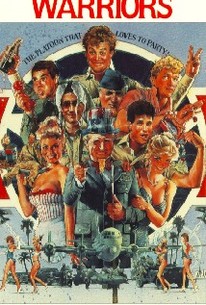 This comedy is set in Hollywood in 1961, where a group of young men join the National Guard in an attempt to escape Vietnam. The men basically do nothing while on supposed weekend duty until they get a visit from the Army, which threatens to ship them out on active duty unless they shape up. Their solution is to hire a troupe of actors to portray convincing soldiers, put on a stage show to impress the Army officers, and make sure that enough winsome nurses are around to satisfy the proverbial lecherous tendencies of a certain colonel.

Jeff Allin
as Cop in Chase

Monique Gabrielle
as Showgirl in Plane

Juney Smith
as Ain't
View All

There are no critic reviews yet for Weekend Warriors. Keep checking Rotten Tomatoes for updates!