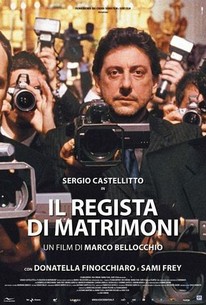 Franco Elica, a dissolute movie director who slides into despair after being asked - to his horror - to make yet another version of Alessandro Manzoni's The Betrothed. Complicating matters is news that a looming sexual-harassment scandal is about to break. Hoping to avoid the scandal at all costs, Franco flees to Sicily where he hides out in a small village. There he meets a host of colorful characters: a man who makes his living shooting souvenir wedding films, a film director who is faking his own death to finally achieve the fame that has eluded him all his life, and the cultured nobleman Prince Ferdinando Gravina di Palagonia. The menacing Prince, a huge fan of Franco's movies, commissions the depraved filmmaker to shoot the wedding of his tempestuous daughter, Bona, with whom Elica quickly falls impulsively, idiotically, dangerously in love and whose wedding he becomes driven to sabotage at all costs.

In The Wedding Director, Sergio Castellitto, the film's star, is the perfect vessel for the director Marco Bellocchio's playful, sorrowful sensibility.

'Do you make art or chocolate commercials?' the prince taunts Franco. The strained art in The Wedding Director makes you hungry for the candy.

The humour's less hit than miss, and a little of Castellitto's melancholia goes a very long way. Disappointing.

[The] overriding deceptions and flaws give ample cause for an early annulment with discerning viewers.

Promises much more than it delivers.

Unfortunately, The Wedding Director itself is a major comedown from Bellocchio's miraculous classic movies (Fist in His Pocket, The Eyes, the Mouth, etc.).

All in all, the film will hold its own and become a standout for the sake that it boldly tried and succeeded.

The Wedding Director is truly complex; but that's also its delight.

Marco Bellochio's The Wedding Director is a pleasant enough trifle -- just the thing for a dreamy summer afternoon.

Even if the incomprehensible last half-hour is a miss, this is a well-directed and sharp comedy with a great performance by Castellitto - and the scenes involving a film director faking his own death are the highlight.