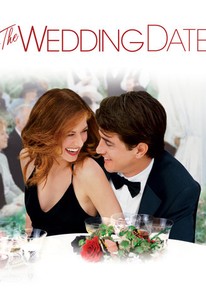 Critics Consensus: Critics are leaving The Wedding Date at the alter, calling it shopworn, bland, and lightweight.

Critics Consensus: Critics are leaving The Wedding Date at the alter, calling it shopworn, bland, and lightweight.

Critic Consensus: Critics are leaving The Wedding Date at the alter, calling it shopworn, bland, and lightweight.

Kat Ellis is looking for the right man -- now! The position comes with a few requirements. The qualified candidate should have the ability to make ex-boyfriends jealous, to turn heads whenever entering a room and to reduce any woman to a weak-kneed, besotted admirer. Kat wouldn't be so urgently in need were it not for her spoiled half sister's wedding, where the best man happens to be Kat's handsome ex-boyfriend. What's worse, the currently single Kat has to schlep all the way from New York to London, where her wildly dysfunctional family lives. Kat does what any enterprising single woman would do -- she hires a professional escort. So what if her solution crosses a few morally dubious lines and costs her a tidy 6,000 bucks? Lucky for her that she hires Nick Mercer, one of New York's better known and in-demand professional male escorts. Once in England, the insightful and charismatic Nick helps Kat navigate the choppy waters of her screwy family and caddish old flame Jeffrey and convinces everyone he meets that he and Kat are an item. As Nick charms Kat's parents, Bunny and Victor Ellis, her self-absorbed half sister Amy, Amy's fiancée Edward and every living, breathing woman within a 100-kilometer radius, Kat finds herself feeling things she's never felt before. What begins as merely a face-saving ruse with a dashing guy-for-hire quickly becomes more than Kat ever expected.

News & Interviews for The Wedding Date

View All The Wedding Date News

Critic Reviews for The Wedding Date

As forgettable as a Hollywood couple's marriage vows.

Nothing says true love like a movie about a desperate, neurotic woman who hires a male whore to take her to her sister's wedding so she can make the ex-fiance jealous. I wonder if they have a Vermont Teddy Bear for that?

This is a charmless, lifeless affair that had me leaving the theater in a mood more appropriate to a funeral than a wedding.

Clare Kilner's cast frolics in the countryside in an appropriately British-romantic-comedy fashion, and at times the characters trade silly snaps, but Dana Fox's screenplay is structurally shaky.

Mulroney is a stealth actor: Whenever you see him in a picture, you're not just reminded of how good he almost always is -- you have the sense of discovering it for the first time.

Admittedly, no part of the year is immune to bad romantic comedies. But what distinguishes The Wedding Date, what qualifies it so impeccably for turkey season, goes way beyond generic foulness.

The only positive thing that can be said for The Wedding Date is that for some completely inexplicable reason it is set in England and so includes some lovely pastoral scenery and some interesting looking hats.

The Wedding Date is aiming for Adam's Rib material (the Hepburn/Tracey classic that is one the all-time greatest man versus women films), but its makers are not fit to buff Ms. Hepburn's patent pumps.

As predictable as a church ceremony and witless as the pastor's blessings, leaving one to ponder this wedding's "reception."

While there are many of the right ingredients here -- a likable cast, plot potential, a dreamy English countryside setting -- I still can't say "I do" to this fluffy flick.

Audience Reviews for The Wedding Date

Starts off well but goes off the boil once the setting changes to England. Debra Messing puts in a good performance and looks great, but it can't save the story. Its also strange that she has gone "home" for the Wedding of her sister, yet sounds totally American. I guess she couldn't do the accent. I've actually read the book this is based on, and that wasn't fantastic either. I had forgotten Amy Adams was in this one. Not actually the best role I have seen her in - she plays blonde and yucky here. Not sure exactly what fails with this movie. Think it's just a dud storyline and unconvincing.

Really good romantic comedy! Made me fall in love with Dermot Mulroney.

Kat (Debra) is looking for a date for her sister's wedding so she hires an escort to make her ex jealous. Some secrets are revealed at the wedding and things get complicated with the escort. Good cast and good storyline. I'd kill the sister!

"Holy crap. You're worth every penny." Everyone's seen 'Pretty Woman', the film that made Julia Robert's lips the sexiest thing on earth back in 1990. In that movie, a man falls in love with a prostitute (or was it the other way around?) and you can say that love conquered all. But then again, that's like every teenagers fantasy... Falling in love with a hooker. Or is it? Enough of the bullshit and back to the topic. 'The Wedding Date' is like 'Pretty Woman' but the other way around. Here the man is an escort and the woman is the one paying for the services. But there's no lips of Julia nowhere to be seen. Debra Messing's character is on her way to her sister's (Amy Adams) wedding in England. Her former boyfriend is the bestman and there's like no way she's going there alone! You gotta like make the former one jealous. Dah. So the answer to her problems is the Yellow pages. Double Dah. Off to England and her messed up relationships there. But it's her luck that the male escort (Dermot Mulroney) is a charmer. Cupid's just around the corner... (SPOILER?) I just didn't get it. I guess I missed the part where people actually fell in love? Or was it even written in the film? It's just hard to imagine that a person would fall for a person who takes money for services like this. But then again I'm not that romantic. Was there a saying that the hooker's have a heart of gold or something? Debra Messing and Dermot Mulroney have a good chemistry, so it's a good thing and a necessity in a romantic comedy. I'm strictly straight but even I would've come in my pants if Mulroney's velvety rough voice would whisper softly in my ears and tease me by kissing... Did I actually write this? Well, enough with the "oh-I'm-trying-to-be-funny" shit. 'The Wedding Date' was enough of a good romcom to be seen once. I didn't understand the person's actions but it's not my genre. I'm not in to romantic comedies, even if Julia's lips would star in the movie. Some occasional funny scenes and two good leads. Worth a watch with female company.