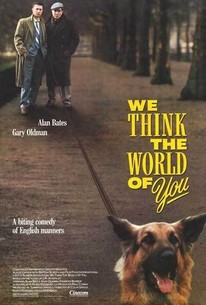 We Think the World of You Photos

Joseph R. Ackerley's semiautobiographical novel, set in sexually suppressive 1950s London, is brought to the screen in tragicomic fashion. The film's bone of contention is a German shepherd, owned by convicted felon Gary Oldman. A bitter "custody battle" ensues over the dog, involving Oldman's parents, his wife, and his homosexual lover Alan Bates. This sound likes stuff which farce is made of, but the characters and situations are all too real and recognizable. Besides, that has to be the most loveable German shepherd ever recorded on film.

Critic Reviews for We Think the World of You

It is wise and perceptive about human nature... and how the undeserved, unrequited love of an animal is sometimes so much more meaningful than the crabbed, grudging, selfish terms that are often laid down by human beings.

There are no featured reviews for We Think the World of You at this time.

We Think the World of You Quotes