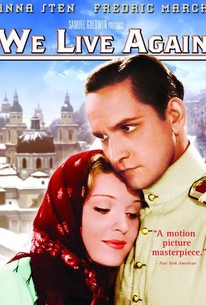 We Live Again was based on Tolstoy's Resurrection; the title was changed upon producer Sam Goldwyn's theory that it meant the same thing as Resurrection and was easier to understand. The film was meant as an introductory showcase for Goldwyn's latest discovery, Russian actress Anna Sten. The story, much laundered from the Tolstoy original, depicts the downfall of a peasant girl who is seduced by a Russian prince (Fredric March). The once-callous nobleman tries to make amends for the hurt he has inflicted on the girl, who has wound up in prison for solicitation. The first American version of Resurrection, directed by D. W. Griffith, was made in 1909 and lasted ten minutes.

Gilbert Clayton
as Man in Church

Theodore Lorch
as Guard in Courtyard

Stanley Blystone
as Guard in Cell

Critic Reviews for We Live Again

We Live Again is a powerful, tragic, broodingly Russian picture.

The new film is a handsome and impressive tribute to its director, Rouben Mamoulian, who, apart from his predilection for nature scenes, showing young couples chasing each other through apple blossoms, really does some beautiful things in this picture.

This 19th-century costume drama was saved from its lapses by the grandiose direction of Rouben Mamoulian.

Only recommended for Fredric March completists (if such a person even exists).

Audience Reviews for We Live Again

Dull, pedestrian drama starring Goldwyn's folly Anna Sten. While she isn't bad she didn't possess the star impact that is essential to carry a film. Of course it doesn't help that the screenwriters try and compress a Tolstoy story into less than an hour and a half and fail. High production values but if never seems anything else but a setbound play and not a compelling one.