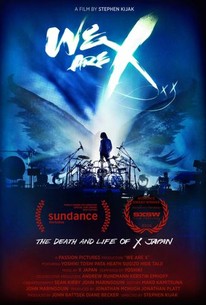 We Are X Videos

We Are X Photos

From the production team behind the Oscar winning Searching for Sugar Man comes We Are X, a transcendent rock & roll story about X Japan, the world's biggest and most successful band you've never heard of...yet. Under the enigmatic direction of drummer, pianist, composer, and producer Yoshiki, X Japan has sold over 30 million singles and albums combined--captivating such a wide range of admirers as Sir George Martin, KISS, Stan Lee, and even the Japanese Emperor--and pioneered a spectacle-driven style of visual rock, creating a one-of-a-kind cultural phenomenon. Chronicling the band's exhilarating, tumultuous and unimaginable history over the past three decades--persevering through personal, physical and spiritual heartache--the film culminates with preparations for their breathtaking reunion concert at New York's legendary Madison Square Garden. Directed by acclaimed documentarian Stephen Kijak (Stones in Exile, Scott Walker: 30 Century Man), We Are X is an astonishingly intimate portrait of a deeply haunted--but truly unstoppable--virtuoso and the music that has enthralled legions of the world's most devoted fans.

News & Interviews for We Are X

Queen of Katwe, The Secret Life of Pets, and More on Netflix and Amazon Prime This Week
On DVD This Week: La La Land, Underworld: Blood Wars, and More
Critics’ Choice Documentary Winners: O.J.: Made In America and 13th Win Top Awards

View All We Are X News

Critic Reviews for We Are X

Good anecdotes - but the film's willingness to indulge the band's rampant self-mythologising can get tiresome.

Watchable and interesting - if a tad worshipful ...

When it comes to chronicling their accomplishments on film, all they have to show for themselves is 90 flashy minutes' worth of rockumentary clichés.

Even if you don't care for the band, Kijak's exuberant style which mirrors the music might win you over.

This high-intensity group - resplendent in the plumage of a Sunset Strip hair band, and playing a kind of prog-metal - delivers the goods. In any language.

Although incredibly successful underdogs, We Are X undeniably grabs its audience and has them rooting for X Japan's final breakthrough.

We Are X does well in showing how X-Japan became famous but like Yoshiki himself, is too mysterious and enigmatic that it keeps the viewer from arm's length, wanting to know more.

X Japan's dedication to music remains admirable but Kijak's film places them on a similar pedestal to that of their swooning fans when it's a closet stashed full of skeletons that would've provided the braver and far more worthwhile material to inspect.

What drives [director Stephen] Kijak's film, and adds a universal dimension to a singular band's narrative, is the drama inherent in a group of strong personalities who live for music attempting to create and perform it together.

Splits, suicides, a brainwashing cult and industrial quantities of hairspray and make-up all play their part in the story, with the fragile Yoshiki fulfilling the role of tortured artist to perfection.

There are no featured reviews for We Are X at this time.

We Are X Quotes