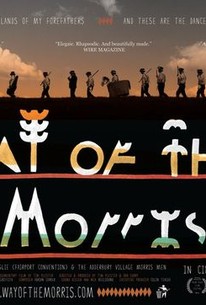 As quintessentially homegrown as a game of cricket or a plate of fish-and-chips, Morris dancing is one of Englands most ancient roots traditions. And yet to your average man on the street, its seen as little more than a national joke. And a bad national joke at that. Something to ridicule. Something to be embarrassed about. Things have always been a little different for actor and filmmaker Tim Plester. Tim hails from a family of Morris dancers, and was raised in the quiet North Oxfordshire village of Adderbury; a community with a proud and fertile dancing history stretching back through the centuries. The tinkling of the shin-bells is part of his heritage. Part of his legacy. Part of his very folklore. And yet, despite the connections, Tim doesn't dance. Never has A heartfelt docu-ballad in praise of birthplace, bloodline and rural brotherhood, WAY OF THE MORRIS follows Tim on a deeply personal journey from the barleyfields of his childhood to the killing fields of The Somme, as he traces the poignant link between the spirited folk revival of the mid-1970s and the true story of the young Adderbury Morris side so decimated by the carnage of the First World War. Featuring contributions from singer/songwriter Billy Bragg and Fairport Conventions Chris Leslie, and utilizing treasured home-movie footage and rare village archive, what emerges is a timely and evocative exploration of the origins and impulses behind the Morris, and an attempt to understand its curious place within enchanted Britannia's ongoing story.

Critic Reviews for Way Of The Morris

An undeniably charming film about morris dancing that, despite its jokey title, turns out to be a very personal essay-meditation on identity and tradition.

The film feels like an instructive and instinctive dip into something mysterious and tense.

It's a meandering, idyllic and odd family history that feels like a sleepy Sunday walk in the country.

An enchanting traipse through England's green and pleasant land that shares some fascinating insights into this proud folk tradition. You'll never laugh at another Morris dancer again.

There are no featured reviews for Way Of The Morris at this time.

Way Of The Morris Quotes