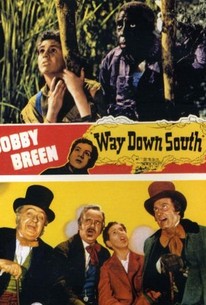 Way Down South ranks as among the better Bobby Breen musicals, if only because of its impressive production credits. The film is set in antebellum Louisiana, where young Tim Reid's (Breen) inheritance is highly coveted by crooked attorney Martin Dill (Edwin Maxwell). With the help of kindly Cajun innkeeper Jacques Bouton (Alan Mowbray), Tim is able to foil the villain, with time left over for a number of Southern-fried tunes. The film's attitudes towards slavery-to a man, the "darkies" are blissfully content with their lot in life-is astonishing, inasmuch as the film was cowritten by Clarence Muse (one of the more militant black performers in Hollywood) and African American poet Langston Hughes! The screenwriters were also responsible for the songs, including "Louisiana" and "Good Ground."

Charles B. Middleton
as Cass

Marguerite Whitten
as Lulu
View All

Critic Reviews for Way Down South

Absurd musical curio, that wants us to believe that slavery can be good if the white owner is benevolent.

Audience Reviews for Way Down South

There are no featured audience reviews yet. Click the link below to see what others say about Way Down South!