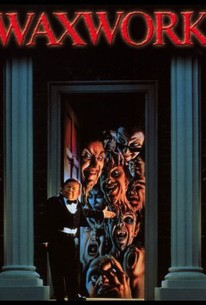 In this horror film, an evil magician creates a wax display of famous monsters and murderers and invites a group of unsuspecting young college students to view the collection. However, when the kids are trapped in the deadly displays, one-by-one they soon discover that the wax models are more than they appear to be.

Kendall Conrad
as Gril in Pyramid

Hickox never pretends his film is more than it is, sticking to what makes it good: the near surreal atmosphere, great monsters, a dash or five of blood.

Better than "House of Wax" anyway

Just sort of lays there for long stretches like a dead weasel.

Amusing diversion, but nothing special

Entertaining comic horror which see's six young friends lured to a mysterious waxwork museum where the owner has plans to make them part of the exhibit. It's a little silly but a good fun ride all the same. You have a good range of classic monsters on show from Vampires, Zombies and Werewolves and a decent amount of gore too. It all has a rushed feel to it and the editing is very choppy but that just keeps the excitement flowing!

Cheesy and campy, but great fun. Lots of eye candy for both sexes too. As long as you don't take it that seriously, then you probably won't be disappointed.

An evil waxwork proprietor uses his occult powers to send teenagers into a lame nightmare worlds inhabited by famous film monsters, which will somehow enable him to take over the world. Competent production values and a tiny bit of humor can't save the tepid teen terror tableaux.

Whoever watches Waxwork and takes this movie seriously will probably not have a fun time with it. If before you watch this film and know what you're getting into, which is top-notch cheese, gory displays of bloody violence, bunches of corny ass one liners, and a shitload of classic Universal monsters running amok...then you'll probably be quite pleased with this movie. I for one loved Waxwork and I grew up on this film. The plot is quite original... "A group of spoiled brat rich kids are invited to a special party at a new wax museum that sprung up over night in their neighborhood. Yeah, it strikes them as a bit odd that a waxworks was opened on a residential street, but they head over anyway. Our four friends roam the museum unattended and conveniently separate from one another. The museum itself is more like a chamber of horrors than anything else with one gruesome display after another. One by one each young adult steps into a display and are then transported directly into the exact scene and forced to play the part on display. Thrust into an alternate universe each one is made to fight for his or her life in a scene that resembles a classic horror flick whether it's involving a suave Dracula or the bite of a Wolf Man. If and when they don't succeed, they then become a permanent part of the scene as the waxwork becomes their new home. Two of them become part of the Waxwork while two escape, and needless to say they have a devil of a time convincing the police that something is wrong. Will our hero be able to put an end to the evil mastermind behind the waxworks before it's too late? Or will the prophecy be fulfilled allowing the Waxworks to take over the world?" This movie is hell of a lot of fun and hilarious. A truly underrated hidden gem from the 80's and it's quite bloody too. The acting isn't that bad actually, in the sense that they all play corn balls extremely well, and the dialogue is so silly to the point where it becomes very funny. The makeup effects here are amazing, and it's always fun to watch a man being split in half by an angry werewolf, or even a vampire eating chunky flesh from a man's half severed leg. This movie is not at all about the scare factor, but more for the fun and entertaining eye candy as well as the silly gags. Waxwork is another good Halloweenie-feel horror movie, a good popcorn flick with all your favorite horror movie creatures in it...the wolfman, the vampire, the mummy, and my favorite waxwork segment in the movie, the zombies! The ending part of Waxwork is truly classic. We get the ultimate battle between man and monster. When all the wax figures in the museum come back to life the humans fight back. Guns blazing, sword swinging, arrows flying through the air...a total and complete massacre(all though this specific fight wasn't that bloody, just very fun to watch). Also, don't expect this fight scene to be something out of a "300" movie, remember this was just a little B movie that's from the 80's. Not to be taken that seriously. Get the popcorn and slide this DVD in. Waxwork is a cool little bloody, fun horror movie. Highly recommended.