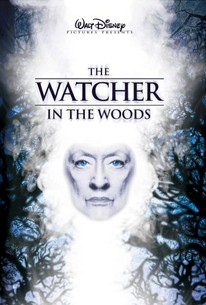 Critics Consensus: The Watcher in the Woods boasts plenty of spooky atmosphere and a typically strong performance from Bette Davis, but it builds to a conclusion so dissatisfying that it undermines all that came before.

Critics Consensus: The Watcher in the Woods boasts plenty of spooky atmosphere and a typically strong performance from Bette Davis, but it builds to a conclusion so dissatisfying that it undermines all that came before.

Critic Consensus: The Watcher in the Woods boasts plenty of spooky atmosphere and a typically strong performance from Bette Davis, but it builds to a conclusion so dissatisfying that it undermines all that came before.

This chiller represents one of Disney's first attempts at a more serious horror movie as it chronicles the travails of an American family who rents a charming country cottage from a strange old woman. The home is set within some mighty spooky-looking woods, and soon after they move in, one of their young daughters begins experiencing scary visions. Eventually they figure out that the hapless child has been possessed by the spirit of the old lady's dead daughter, who vanished many years before.

Critic Reviews for The Watcher in the Woods

It symbolizes the confusion that has been undermining Disney's live-action productions. Craving more stimulating material on one hand but still wedded to reassuring coziness on the other, the studio shortchanges both tendencies.

Watcher in the Woods is a first-class thriller, far superior to the usual run of frightened-girl, creepy house movies.

The acting and writing are barely professional but the art direction, especially Alan Hume's stunning camerawork, gives the pic a gloss.

When it became obvious that the film's mix of cutesy sentiment and vague scariness wasn't working, the company ordered whole sequences to be rewritten, re-shot or re-edited, then imposed a stupid ending that explains precisely nothing.

I challenge even the most indulgent fan to give a coherent translation of what passes for an explanation at the end.

Worth seeing as a genre film and the two ten year olds in front of me were gripped throughout. Maybe it's the first horror film for children.

It doesn't settle for cheap boring scares and or cheap gory scares.

This being an early Eighties Disney film, there aren't too many headless corpses lurking in the house and surrounding woods, but there are still some genuine shivers.

Even with a lackluster ending, The Watcher in the Woods is one of the more effective young adult horror pictures.

The psychic alien time-warp plot is too silly for adults and not daft enough to make it a proper children's treat.

Davis, in her 50th year in movies, is wonderfully wicked. But she can't compensate, especially for the contrived ending of this Disneyville Horror.

The Watcher in the Woods is a haunting, unusual film, steeped in a strange magic that's only enhanced by the dense thicket of rumour and myth that surrounds it.

Audience Reviews for The Watcher in the Woods

I think it's fair to say that Disney was just trying to jump on the horror bandwagon with this movie. That totally brings down the integrity of this. At least it is based on a novel. Although the story is somewhat chilling, only kids will be scared, and not by much. It might be better to read this instead because the story is good. I just wish this movie was better.

Mediocre scare flick, rather dark for a Disney film but not really very frightening. Lynn-Holly Johnson is an appallingly bad actress ruining every scene she's in. Old pros McCallum and Carroll Baker are wasted. Poor Bette Davis is spared nothing, made to look perhaps the worst she ever did on screen except in Baby Jane where at least she was supposed to look bad. She's still the most compelling presence in the film in her brief scenes.

It's hard to fathom what Disney were trying to do with this messy horror picture; "The Watcher in the Woods" is more likely to upset rather than enchant young children, and older, more discerning viewers will probably find it as toothless as it is incoherent. It was infamously chopped about and re-shot by the studio and, consequently, makes very little sense. Although there's a good deal of subjective, "Watcher's-eye-view" camerawork, disappointingly we don't ever get to see the creature itself. However, the atmosphere is reasonably potent and there are a couple of spookily effective moments. Bette Davis makes a late-career appearance, but she's only on hand to look vaguely sinister and contributes little more than a cameo. Interestingly, the film cribs a couple of elements from "The Shining", namely ESP and backwards writing. Undoubtedly, the worst thing about the movie is the awful lead performance of Lynn-Holly Johnson, who some people may remember being equally bad as the figure-skater in "For Your Eyes Only".

The Watcher in the Woods Quotes