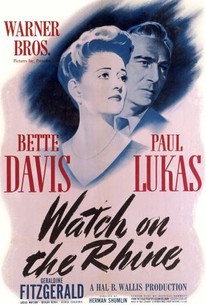 Watch on the Rhine Photos

An expansion of, and improvement upon, Lillian Hellman's stage play of the same name, Watch on the Rhine stars Paul Lukas, recreating his Broadway role of tireless anti-fascist crusader Kurt Muller. As the clouds of war gather in Europe in the late 1930s, Muller arrives in Washington DC, accompanied by his American wife Sara (top-billed Bette Davis) and their children Joshua (Donald Buka), Bodo (Eric Roberts) and Babette (Janis Wilson). The Mullers stay at the home of Sarah's wealthy mother Fanny Fannelly (Lucille Watson), who lives in her own world of society get-togethers and can't be bothered with politics. Also staying with Fanny is Rumanian aristocrat Teck de Branovis (George Coulouris) and his American wife Marthe (Geraldine Fitzgerald). To protect his family, Muller keeps his "underground" activities a secret from Fanny and her guests, but de Branovis is suspicious of the mild-mannered visitor. It turns out that de Branovis is actually a Nazi sympathizer, willing to betray Muller for a price. Using blackmail as one of his weapons, de Branovis threatens to destroy all that Muller has been fighting for. To prevent this, Muller kills de Branovis in cold blood. Now technically a murderer, Muller bids his family a reluctant goodbye, heading back to Europe to continue his vital work. If ever there was a justifiable homicide in a motion picture, it was the killing of the odious de Branovis in Watch on the Rhine. Still, the Hollywood production code dictated that a murderer must always pay for his crimes, thus a coda is added, alluding to Muller's death-providing a golden opportunity for a nifty smiling-through-the-tears curtain speech by Bette Davis. Scripted by Lillian Hellman's lover Dashiel Hammett, Watch on the Rhine earned several Academy Award nominations, as well as a "best actor" Oscar for Paul Lukas. ~ Hal Erickson, Rovi

Critic Reviews for Watch on the Rhine

Watch on the Rhine is a distinguished picture. It is even better than its powerful original stage version.

Audience Reviews for Watch on the Rhine

A middling Bette Davis film which doesn't happen very often. I get the sense that this is yet another propaganda film and thus the actors only have one dimension to explore. Only mildly entertaining.

Watch on the Rhine Quotes