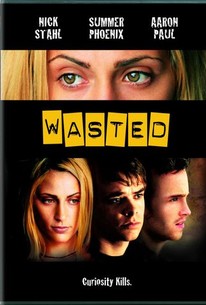 An outgrowth of the MTV cable network's 1998 documentary True Life: Fatal Dose, Wasted is a cautionary modern fable about the pitfalls of heroin addiction. The three teenaged protagonists, lifelong friends all, are Samantha (Summer Phoenix), Owen (Aaron Paul), and Chris (Nick Stahl). As levelheaded Chris stands on the sidelines, Sam and Owen become lovers, only to fall prey to drugs. After Sam OD's on some bad "H," Chris provides moral support, while callous Owen insists upon partying on. Yearning to find out why Sam continues to be attracted to Owen despite his bad influence, Chris himself begins experimenting with heroin, egged on by Owen's new girlfriend Amy (Brittney Irvin). Who will ultimately survive this thorn-thicket of bad relationships and drugs? Filmed in Alberta, Wasted made its American TV debut on March 17, 2002.

Stephen Kay
as Counselor
View All

There are no critic reviews yet for Wasted. Keep checking Rotten Tomatoes for updates!

There are no featured audience reviews yet. Click the link below to see what others say about Wasted!