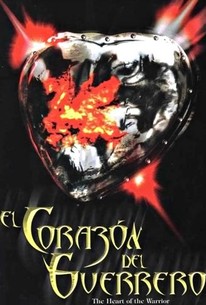 Recalling the darkly surreal world of Terry Gilliam, director Daniel Monzon debuts with this delirious film about a teenager shifting between grim reality and the much more alluring world of fantasy. The film opens with the muscle-bound Beldar (Joel Joan) and the vivacious Sonja (Neus Asensi) decapitating monsters and interpreting ancient languages in a dank labyrinth as they hunt for a legendary gem called the Heart of the Warrior. Without it, Beldar is cursed. Just before the dynamic duo meets their demise, Ramon (Fernando Ramallo), a pimply teenager, awakes from a dream. We learn that Beldar and Sonja are characters in a Dungeons and Dragons-style role playing game that Ramon plays along with Victor (Juan Diaz) and the perpetually horny Javi (Jaime Barnatan). As the film progresses, Ramon's intense fantasy world begins to bleed into reality. A one-eyed midget (Javier Aller) who Javi spies on the subway becomes the guardian of the evil Netheril (Santiago Segura), who in real life is a sleazy TV psychic. The fictional character Sonja, who Ramon is in love with, finds her real world incarnation as streetwalker Sonia (also Asensi). Soon Ramon begins to confuse fiction with reality when he bursts into the building of a prominent politician and hurls a sword at him, prompting a nationwide manhunt.

Luis Tosar
as Detective
View All

There are no critic reviews yet for El Corazon del guerrero (Heart of the Warrior). Keep checking Rotten Tomatoes for updates!

There are no featured reviews for El Corazon del guerrero (Heart of the Warrior) at this time.