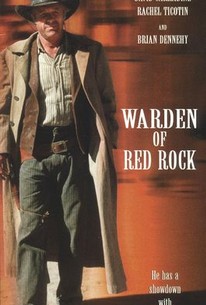 James Caan stars in this made-for-cable Western as John Flinders, a former outlaw who by the year 1910 has settled down as the warden of Arizona's Red Rock Prison. Priding himself on his fair and humane treatment of his prisoners, Flinders finds his values -- and his loyalties -- sorely tested upon the arrival of convicted murderer Mike Sullivan, who happens to be John's old saddle pal from his wilder days. As Flinders resists Sullivan's never-ending efforts to escape, he also embarks upon a romance with the widow of executed convict Carl McVale. Executive producer Brian Dennehy appears in a small but significant role. Warden of Red Rock made its Showtime network premiere on March 18, 2001.

Mark Burnham
as Luke
View All

There are no critic reviews yet for Warden of Red Rock. Keep checking Rotten Tomatoes for updates!

There are no featured audience reviews yet. Click the link below to see what others say about Warden of Red Rock!