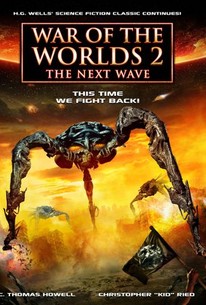 The Martian walkers return to wipe out humanity in this sci-fi sequel from director C. Thomas Howell. It's been two years since the first wave of attacks on planet Earth, and mankind thought they had achieved victory over the alien invaders. Now, as destruction rains down from the stars, military forces from around the world unite and prepare to launch a surprise attack on Mars. With the fate of all mankind hanging in the balance, the ultimate fight for the future begins.

Critic Reviews for War of the Worlds 2: The Next Wave

There are no critic reviews yet for War of the Worlds 2: The Next Wave. Keep checking Rotten Tomatoes for updates!

Audience Reviews for War of the Worlds 2: The Next Wave

Straight to DVD flick which to be honest pretty much looks like it and can't really boast anything worth while in the visual effects stakes. Following from the original film and the Wells novel the plot carries on with the next wave of alien walker attacks, its not really that interesting to be honest as the cast is poor with very basic performances and pretty much all sets and location work are very obvious. Thing is you just feel your watching the same plot and film from the original all over again, there isn't much new or exciting happening here and it just seems rather pointless. The only plus point I can recall is a reasonable looking sequence where US fighters fight martian spaceships which skips rather close to a certain film called 'Independence Day' but its the only sequence which looks OK. My suggestion? stick with the classic 1953 version ;)

War of the Worlds 2: The Next Wave Quotes