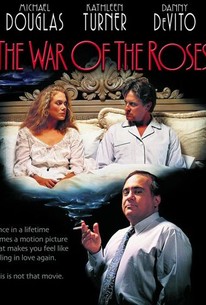 Critics Consensus: The War of the Roses is a black comedy made even funnier by hanging onto its caustic convictions -- and further distinguished by Danny DeVito's stylish direction.

Critics Consensus: The War of the Roses is a black comedy made even funnier by hanging onto its caustic convictions -- and further distinguished by Danny DeVito's stylish direction.

Critic Consensus: The War of the Roses is a black comedy made even funnier by hanging onto its caustic convictions -- and further distinguished by Danny DeVito's stylish direction.

The War of the Roses Photos

Divorce lawyer Danny De Vito warns his prospective client that the story he's about to tell isn't a pretty one, but the client listens with eager intensity -- as do the folks out there in the movie in the audience. The War of the Roses can best be described as a slapstick tragedy concerning the decline and literal fall of a marriage. After 17 years, Oliver (Michael Douglas) and Barbara (Kathleen Turner) Rose want a divorce. Not for this couple is there anything resembling a "civilized understanding": Barbara wants their opulent house, and Oliver isn't about to part with the domicile. Barbara nails the basement door shut while Oliver is downstairs, Oliver disrupts Barbara's fancy party by taking aim at the catered dinner, Barbara lays waste to Oliver's sports car....and so it goes, culminating in a disastrous showdown around, about and under the living room's fancy chandelier. DeVito and screenwriter Michael Leeson never let us forget that the couple's self-indulgent imbroglio exacts an awful price upon their children (Sean Astin and Heather Fairfield). The War of the Roses was adapted from the novel by Warren Adler. ~ Hal Erickson, Rovi

Heather Fairfield
as Carolyn (at 17)

Popeye the Dog
as Bennie

Dan Castellaneta
as Man in Chair

Tyler the Cat
as Kitty Kitty the Cat

Philip Perlman
as Bidder at Auction

Prince A. Hughes
as Bleeding Man

Fred Scialla
as Stand-In
View All

News & Interviews for The War of the Roses

View All The War of the Roses News

Critic Reviews for The War of the Roses

DeVito's taste for unorthodox camera angles and striking camera movements occasionally verges on overreaching but for the most part admirably serves the action.

Trying to wring yocks from a deranged couple locked in mortal combat over possession of their house is more suited to film noir than black comedy.

De Vito's quirky camera angles and Kathleen Turner's steely-eyed spite inject a sadistic comic-strip madness into a film that for once has the nerve to see its nastiness through.

DeVito's direction is distinctively odd (with a lot of low-angle shots looking up at things), enjoyably mischievous and always somehow mindful that there may be, at the heart of all this comic mayhem, something substantial going on.

DeVito triumphs by instilling this caustic satire with truth and consequence.

[A] deliciously jaundiced perspective on matrimony.

DeVito's sprightly, slightly skewed approach can both surprise and please.

Greatly amusing, but its lasting achievement is DeVito's atmospheric authority, shaping a genuine filmmaking triumph in style and mood that deserves a standing ovation.

One of the most durable -- and characteristic -- comedies of the 1980s.

The film just keeps getting darker and more claustrophobic, like sliding down the center of a spiral.

Audience Reviews for The War of the Roses

Oliver Rose: You weren't even multiorgasmic before you met me, were you?  "There is no winning! Only degrees of losing!" It took me a long time to finally watch this movie and it really was worth it. This is a dark comedy out of heaven. I loved everything about it. Danny DeVito's commentary and direction are awesome. And of course Michael Douglas and Kathleen Turner give fantastic and fun performances as a married couple who are now dueling for their home. The movie is extremely fun and entertaining.  Oliver and Barbara Rose have been married for 17 years. In those 17 years, they had two kids and Oliver worked himself into a position where he is making loads of money. The family is rich and they buy their dream house. Barbara spends years making the house as perfect as possible, but when she is finally done she realizes that her marriage is no longer a satisfying one. She wants a divorce, but she also wants the house and Oliver isn't going to give that up easy. Basically the whole run time is full of marital disputes and craziness.  Kathleen Turner is so good at playing a bitch. She excels at it to such a degree, that I only think of her as a bitch. Michael Douglas is just Michael Douglas. He's a solid and multidimensional actor who never disappoints. Those two on screen together in this movie are perfect. They much more fun to watch then they were in Romancing The Stone.  The movie is essentially a drama that they playoff as a comedy, and it works really well. These types of Black Comedies don't always work, but when they do, they aren't just good, they're amazing. This is one of those examples. DeVito doesn't make a false step. He brings us into a world of marital hell and he does it with a strong sense of style and wit.

Funny movie about a divorce lawyer and his client Oliver Rose. Barbara worked her whole life to provide for her family and make a good home. When the kids are off to college, she wants to set up her own business. Her husband takes no interest. He thinks their life is perfect but she wishes he was dead. They war over their beautiful house. Great cast.

Fun and really dark black comedy about a fighting couple from Danny DeVito.

Very enjoyable 80s movie. Some good laughs but I still love Romancing The Stone & The Jewel Of The Nile the best lol!!!! :)

The War of the Roses Quotes