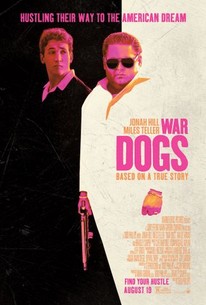 "War Dogs" follows two friends in their early 20s (Hill and Teller) living in Miami Beach during the Iraq War who exploit a little-known government initiative that allows small businesses to bid on U.S. Military contracts. Starting small, they begin raking in big money and are living the high life. But the pair gets in over their heads when they land a 300 million dollar deal to arm the Afghan Military--a deal that puts them in business with some very shady people, not the least of which turns out to be the U.S. Government.

Video: Conversations with 2017 Golden Globes Nominees
On DVD This Week: Hell or High Water, Kubo and the Two Strings, and More
The Crown, The Emperor’s New Groove, Grosse Pointe Blank, and More Available to Stream on Netflix and Amazon Prime

By the end we have warmed -- almost -- to the innocent villainy of two con folk serving a greater maladroit maleficence.

By bantering with the lads and slapping their wrists at the same, War Dogs is left with countless rounds of illicit ammo and no clear satirical target.

Hard to imagine a less imaginative rendering of this story.

There is certainly comic value in the way the two weed-smoking Miami-based friends somehow turn themselves briefly into "players" in the international arms business. Phillips tells their story with plenty of gonzo-style zest.

The satire hits with powder-puff force thanks largely to the film's ruinous lack of moral shading around David and Efraim's exploits.

War Dogs isn't a game-changer by any definition... but as a calling card for a filmmaker seeking a jump to the big leagues, it demands to be considered. And God bless the deliciously ambiguous ending.

Is War Dogs supposed to be a comedy? Some sort of satire? A sobering indictment? Phillips tries to make it all of these things at different points throughout the movie, and the cumulative effect doesn't work.

Thanks to Jonah Hill and Miles Teller, this film, based on a true story, is funny, disgusting, tense, troubling but it's also very watchable.

Director Todd Phillips graduates from schtick comedy to more serious subject matter with this film but still manages to interject moments of "slapstick" that remind you of his previous success.

Efraim and David's casual callousness is supposed to be funny... But the uncomfortable truth is that War Dogs, perhaps unconsciously, provides an accurate picture of current US attitudes towards war.

Comparable to The Big Short in its appeal, but with a little less meat for financial wonks and a little more weed.

Based on a true story, War Dogs is a fascinating crime drama about war profiteering. The film follows two former childhood friends who partner up to run an arms company that supplies the U.S. military, eventually conning their way into a multimillion dollar Afghanistan contract. Miles Teller and Jonah Hill are especially good and Bradley Cooper delivers an impressive supporting performance as a mysterious foreign arms dealer. Additionally, the writing is really strong and does an impressive job at breaking down and explaining the arms industry. And, the soundtrack brings a lot of energy and excitement to the film, and helps to set the right tone. A smart and entertaining film, War Dogs explores how avarice corrupts and destroys lives.

As I watched War Dogs, the darkly comic true-life story of war graft, gunrunning, and bro-tastic bravado, I kept wishing to copy and paste other characters into what was an interesting plot. A pair of neophytes was awarded military arms contracts from the Pentagon during the Iraq War, and their schemes to skirt U.S. laws to import guns across borders, illegal and faulty munitions, and uneasily work as a go-between with a client (Bradley Cooper) on the U.S. terrorism watch list are filled with perplexing yet juicy details. The biggest problem is that the two main characters, played by Miles Teller and Jonah Hill, are so powerfully archetypal to the point of unrelenting blandness. We have the naïve everyman pulled into a life of big bucks, big risk, and big power only to have it all come crashing down. Hill's character is the loud, uncouth part we've come to expect from the Oscar-nominated actor, and I defy anyone to tell me anything about Teller's character other than occupation and his relationship to other people. These parts are so thinly drawn that I didn't care about them once they finally got into deep trouble. I believe that director/co-writer Todd Phillips, he of The Hangover series, has the right qualifications to make a flinty neo-noir thriller, but War Dogs is more his half-hearted version of a glib Scorsese movie, or a David O. Russell version of a Scorsese movie. The voice over narration is dull and doesn't help illuminate Teller's character at all, and the other stylistic flourishes, from pointless inter-titles to a non-linear plot, add up to very little. Half of the movie's scant jokes are the ongoing sound of Hill's off-putting wheeze of a laugh. I'm not kidding, after an hour the movie still treats his laugh like it's a potent punchline. There is entertainment value to be gleaned from War Dogs chiefly from its larger-then-life story and the intriguing, shadowy world of war profiteers. It's a movie that made me wish I had read the magazine article it's based upon instead, which would have also been shorter. Nate's Grade: C

Road Trip meets Zero Dark Thirty. After the release of The Hangover in 2008, director Todd Phillips has been on the decline, as far as his theatrical film resume goes. Releasing the lukewarm Due Date and two unnecessary sequels to The Hangover, it was unclear if Phillips would give in to Hollywood in all the wrong ways, or eventually gain traction once again. I can now say, without any hesitation, that Todd Phillips is back. War Dogs marks his ninth directorial debut, and if any film was going to show his new found range as a director, it was this. The Hangover is easily Phillips' best work to date, but putting comedy aside, here is why I believe War Dogs to possibly be his best overall film. While it would be a false statement to categorize War Dogs as a straight up comedy, like most of the directors previous work, it does have its fair share of gags, while still remaining true to the serious (true) story at hand. It is without question that most true stories are altered when translated to the big screen, but film is subjective and one can't judge whether or not a film is good, solely on facts alone. If it is a well-made and well-intentioned film, that is all that matters. As I was viewing this picture, I found myself wondering if 100% of this actually happened, and the reality is that this film is probably only half accurate, so I will refrain from studying the backstory on this one. Following David Packouz (Miles Teller) as he bumps into his old high school friend, Efraim Diveroli, little does he know that he is about to leave behind his boring lifestyle to become a globally known, international arms dealer. Lying to his girlfriend, just after finding out she is pregnant, David embarks on this journey to gain the money necessary to establish a great life for himself. Driving the guns into Iraq themselves, getting involved in black market deals, and eventually spiralling out of control, both physically and mentally, there lives very quickly become hectic. War Dogs is filled with a very serious story, while also choosing to give quite a bit of levity through the very believable performances by Jonah Hill and Miles Teller. While I must say that after the casting announcement that Todd Phillips would be directing a film a little out of his wheelhouse, starring the likes of Miles Teller and Jonah Hill in the leading roles, I have never been more turned off. There was nothing that proved these two could share any believable on-screen chemistry, but I was rapidly shot down as soon as their first scene together in the film took place. Jonah Hill being the untrustworthy businessman and Miles Teller being the vulnerable family man, ended up making for some very funny, fast-moving, and sometimes sentimental scenes. Having Bradley Cooper appear in the film was just the icing on the cake. Having worked with this director quite a few times in the past, it was without a doubt going to be a great fit for the film. Although he is not on screen much, his presence only added to the talent that was already present. I have been raving about everything this film was able to accomplish, but there are a few moments that could have been trimmed down or cut out in my opinion. There are a few instances where characters repeat lines of dialogue, almost verbatim, of something that was noted in a previous scene. While I was able to get past that, certain scenes began to slightly drag, making the film feel a little longer than it should have felt. This is solely due to the overuse of drilling the audience with the thoughts of the characters. You could already tell what was motivating each individual character and why they were doing what they were doing, but it almost felt like a portion of the dialogue was spoon-feeding its audience. Aside from that, I believe this film does everything right that it sets out to accomplish, in spades. War Dogs may not be a classic, but for director Todd Phillips, it should be remembered as one of his best. Going a little out of his comfort zone with the comedy aspect, he tackles a far more serious story, giving audiences a taste of the variety he is capable of. In the end, I do not think this is a perfect film, but it is a very, very well-made one. With great performances all around, believable, yet crazy scenarios, and unbelievable chemistry between its two leads, I must say that I am far more impressed with this film than I was hoping to be. Still, I can't go as far as to say I loved it, but it is a very enjoyable time at the movies and I would recommend it to anyone who loves an engaging story, with a taste of some great gags sprinkled throughout. War Dogs is great!