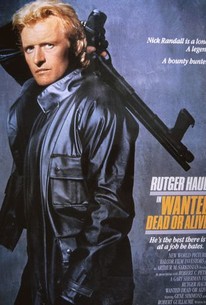 Based on the television series of the same name, a sinister Arab terrorist is out to complete a terrible mission, leaving a number of dead bodies in his wake. In order to capture this deadly villain before he succeeds with his plans, ex-CIA agent Nick Randall (Rutger Hauer) is hired as a bounty hunter to track him down.

Tiiu Leek
as Herself

William Smith
as Himself

Three of the "Ocean’s Thirteen" Show Up
Eminem to Anchor "Have Gun, Will Travel" Remake

There are times during the movie when the greatest mystery is whether or not Rutger Hauer is trying to speak with an American accent.

As far as '80s action flicks go, Wanted: Dead or Alive has its moments, particularly a terrific one in the film's closing minutes.

A bland and often lackluster action thriller with Rutger Hauer failing to hold a candle to McQueen...

As he did in Runaway, rock-star Gene Simmons makes a truly despicable villain. How the terrorist character he plays here gets his just desserts makes for a truly fantastic finish.

While it's great to see Rutger Hauer in an action lead, the movie's just not all that good. At all.

One of the coolest, most in-your-face thrillers of the 80's

Rutger Hauer as a bounty hunter, pitted against a terrorist played by Gene Simmons. It doesn't get any cooler than that. This is low budget 80s action at its best, it utilizes what it has and doesn't come off as cheesy or dumb. The plot works, but it's the little things that make it great. The fact that Rutger Hauer has a command center that rivals the batcave is my favorite aspect. Just total fun.

Hauer is a total badass and deserved a tighter, more exciting flick than this.

Rutger Hauer does some pretty good action sequences in his bounty hunter business.