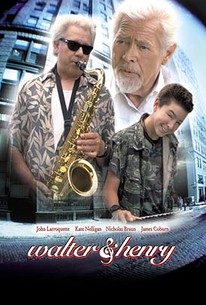 This offbeat made-for-cable comedy/drama concerns Walter and Henry, a father-and-son team of street entertainers who roam from town to town playing music, with few worries and no permanent address. However, when Walter falls ill, its falls to Henry to track down the family they left behind years ago. Walter and Henry stars John Larroquette, Nicholas Braun, Kate Nelligan, and James Coburn.

Kathryn Haggis
as Nurse
View All

Critic Reviews for Walter and Henry

It moves along a bit choppily, continually threatening to become interesting and genuinely poignant but never getting there.

In this lovely little movie, a piano is a boy's best friend.

Audience Reviews for Walter and Henry

There are no featured audience reviews yet. Click the link below to see what others say about Walter and Henry!